ABC San Diego marks the passing of industry leaders, friends over the past year 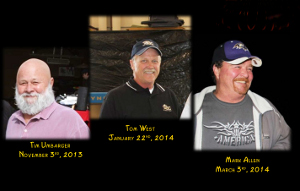 Mark Allen, age 53, passed away while sport-fishing off the coast of Panama on March 3. He began his career in construction in his hometown of Merced, eventually moving to San Diego. For seven years, Allen was employed by Comfort Systems USA and worked on the Terminal 2 Expansion of the San Diego International Airport. He had recently started a new job as vice president of operations for Countywide Mechanical Systems in January.

Allen contributed his 20-plus years of heating and air conditioning experience to ABC as a member of the Sheet Metal Apprenticeship Committee since 2006. He attended the 2008 National ABC Craft Championship as an apprenticeship committee representative. Allen volunteered as a judge in the sheet metal category for local competitions and frequently helped with setting up for the events. He enjoyed many outdoor activities, especially fishing. Allen is survived by his parents, wife Teresa, and two children.

Tom West, age 60, died Jan. 22. West became a journeyman plumber after enlisting in the United States Army following high school, where he served as a military police officer in Germany. He began contributing his professional skills as a mentor through ABC after moving to San Diego in 1989. He served as chairman of the Apprenticeship Training Trust Plumbing Committee. At the time of his death, West was employed by Brian Cox Mechanical as general foreman of the pipe-fitting division.

In addition to devoting his time to training the next generation of construction professionals, West was passionate about Little League baseball. He served more than 20 years as a mentor, coach and umpire for District 32. His proudest moment was being chosen to umpire at the Western Regionals in San Bernardino in 2009.

West earned the family nickname “Smiling Ed” because he was always the life of the party and had the rare gift of making everyone he met laugh. He is survived by his wife of 35 years, Caryn; son, Ryan; stepson, Robert McAllister; mother-in- law, Laura Joan Lagasse; sisters-in-law Susan Lagasse, Adria "Auni" Lagasse and Lynda Langfield; nephews Sam, Ian, Ben and Nick Humphrey; and nieces Megan Langfield, and Molly Rundle.

ABC, North County Trade Tech and the construction industry lost a great friend and advocate when Tim Umbarger passed away at his home Nov. 3, 2013. Umbarger loved the construction industry and the career opportunities it offers to young people. After retiring as president of Good & Roberts Construction Company, he volunteered as a teacher and mentor for young students at North County Trade Tech and was chairman of their industry advisory committee.

Umbarger served on the ABC board of directors for several years. He was serving as a trustee for the ABC Training Trust and as a board member for North County Trade Tech. Umbarger was named the ABC Member of the Year in 2009 for his support of the principles of ABC and his service to the association and the industry. A scholarship program has been established at Trade Tech in Tim’s honor. Donations can be sent to North County Trade Tech High School, 1126 N. Melrose Drive, Vista, CA 92083.