New Sempra Energy building to top out in fall 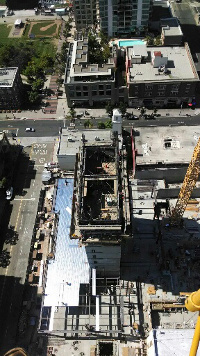 A photo taken from a tower crane shows how work is progressing on Sempra’s new headquarters in the East Village. Courtesy of Cisterra Development

Steve Black, Cisterra Development president and principal, said the 300,000-square-foot building being constructed for Sempra Energy (NYSE: SRE) in the East Village will be topped out by early fall.

The building is being constructed on a 55,000-square-foot block bounded by J Street, Island Avenue, Seventh and Eighth streets.

The concrete core of the building has reached the eighth floor and steel has been erected.

"We're well ahead of schedule," Black said adding that the project should be completed in July 2015 -- about a month ahead of what was already a fast track timetable.

Black said the construction of the project is being bankrolled by credit tenant lease financing over the next 27 years. The local office of HFF (NYSE: HF) placed the financing in conjunction with East Coast firm CGA Finance.

Amenities will include an on-site cafeteria, exercise facilities for employees, an auditorium and meeting areas. Keeping with the times, the new building will also offer more collaborative spaces rather than the corner offices that are the norm in the building Sempra is leaving.

The garage will have 490 parking spaces -- roughly double the number at 101 Ash Street. In addition, the property will have numerous offsite parking options and easy mass transit access.

Sempra will lease the building for 25 years. Neither the terms of the lease nor the projected cost of the building near Petco Park was disclosed.

Turner was both the contractor for the new Central Library and the recently completed Lindbergh Field expansion.

Cisterra is best known here for having developed the 300,000-square-foot DiamondView Tower office and retail building.

The Sempra building is being designed to achieve LEED Gold status, with state-of-the-art energy efficiency and mechanical systems. These are expected to help make the new building's long-term occupancy costs neutral as opposed to remaining in an outdated building with uncertain lease terms.

While the lease has been signed with Cisterra and the construction underway, some details, including interior design and relocation plans, are still being tweaked as the completion date is less than a year away.

Sempra's new headquarters will be able to accommodate at least 800, perhasps as many as 1,100 employees, depending on the final interior configuration. Kline said the new building, like the old will be filled with employees from Sempra Energy, Sempra U.S. Gas and Sempra International.

Sempra's wholly owned San Diego Gas & Electric subsidiary, which fully occupies the 200,000-square-foot Century Park development in Kearny Mesa, will not be affected by this transaction.

What does stand to be affected is the roughly 350,000-square-foot building at 101 Ash St. that Sempra is leaving. That building, which is fully leased to Sempra, is owned by developer and investor Sandor Shapery, who developed Emerald Plaza,

Shapery said there are at least two options when Sempra does leave: One possibility is the building could be used by the city of San Diego, although recently the city has been more inclined to reduce rather than increase its footprint.

Another option, Shapery said, is to turn the Ash Street building into a mixed-use development that would include residential, along with ground-floor retail and perhaps some office space.

The current Ash Street headquarters was originally commissioned and owned by SDG&E in 1968, sold by SDG&E in 1975 and leased back to the utility. The Sempra companies have occupied the building for the past 45 years.

As for why the utility has elected to lease rather than buy its new building, the company wrote that leasing gives the company long-term flexibility.