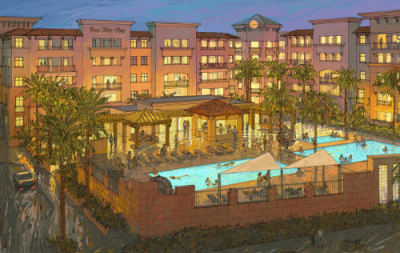 For those traveling south on Interstate 15 through Mira Mesa, the enormous project is unmistakable. It is the Casa Mira View apartment development and it is transforming the landscape.

The Garden Communities development, whose first move-ins were in December 2012, has 1,620 units that are in various stages of construction.

The complex will have 2,167 units at buildout. Dee Snow, Garden manager of forward planning, said exactly when that will happen will depend on market conditions.

A CoStar Group report said that vacancy in the initial 465-unit phase was just 3.4 percent in a recent survey.

"Leasing is going very well. There is a strong demand on the I -15 corridor," Snow said.

CoStar reports an additional 345 units should be ready at Casa Mira View this November.

The project is a design of Los Angeles-based Togawa, Smith Martin Architects. Garden Communities, which has a local headquarters office in the University Towne Centre area, is acting as its own general contractor.

Casa Mira View has already constructed 1,800 structured parking stalls in one garage with three more garages on the way.

"Each garage has one level that is subterranean and five stories above ground," Snow said.

The developer has had to spend millions of dollars in road improvements to alleviate the traffic.

While Garden declined to attach an overall value to its highway work, the construction included traffic improvements to the Mira Mesa and Scripps Ranch areas.

The developer is also working on widening Scripps Ranch Road and Erma Road east of the I-15 and has designed planned intersection improvements at Black Mountain and Mercy roads.

Garden Communities also provided $1.6 million in mitigation funds to Caltrans to widen Mira Mesa Boulevard beneath the I-15 to four lanes in each direction.

As a luxury project, Casa Mira View has or will have many amenities that simply aren't available at existing properties.

Along with such features as a bowling alley and a beauty shop, Casa Mira View will have a wide range of amenities including a deli, a state of the art gym, boxing club, spinning room and a tech lounge.

"We're contemplating a splash zone and community garden, a spa; several pools; a community center with meeting areas including a karaoke area, massage and day spa; sculptures from artists all over the world, solar-powered garages and electric vehicle charging stations," Snow said.

Snow said while there may be elements that are shared among Garden's different complexes, that each one is different "and caters to each community."

Snow added that Casa Mira View has been successful from the beginning because it got the affected communities on board early in the process.

"When our community center opened in the spring of 2014, all members of the local planning groups and city staff were rightfully very proud of what we had accomplished by working together."

Although Garden Communities declined to reveal just how many apartments it has constructed in San Diego County, it had a substantial presence here long before Casa Mira View was even conceived.

Not all the Garden properties are in UTC area. The company's 644-unit Greenfield Village apartment property is in Otay Mesa. That property's vacancy was also low, at just 3.1 percent according to CoStar.