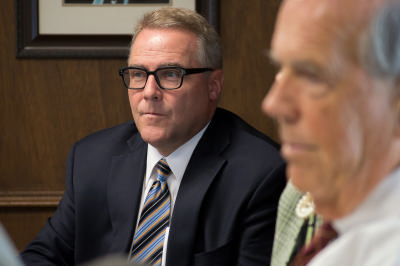 Construction defect litigation is down, multifamily construction activity is up, and material costs appear to be rising at an accelerated rate.

The state of San Diego County's construction industry was the topic of a recent roundtable discussion at The Daily Transcript offices sponsored by Xpera Group.

Gammieri, whose real estate investment trust is heavily invested in both multifamily and retail assets and projects, said the fact there is so much construction in a county with such high barriers to entry is a testament to the strength of this market.

"The public works came first and then the multifamily," Bedingfield said, adding that there are at least $1 billion worth of primarily multifamily projects in the pre-construction phase downtown.

Ted Bumgardner, president of the Xpera Group, a construction consulting and expert witness firm, said "our business has changed substantially within the past 12 months."

"Before, much more of our work was construction forensics and defect litigation. Now, we are seeing small and large commercial and for sale housing along with the multifamily, which has really accelerated within the past six months," Bumgardner said.

Erin Kennedy Clancy, an associate attorney with the civil litigation firm of Lorber Greenfield & Polito LLC, said her firm orchestrates monthly meetings "so as to avoid more problems down the road."

"And you have to get it into plain language," Pendleton added.

"You need to get involved with the contracts two years before you put a shovel in the ground," Bedingfield said.

Bumgardner agreed that the focus has to be on pre-construction.

"You should have water-testing mockups and an iPad-based inspection system that transmits the data to the senior inspector without leaving the site," Bumgardner said.

As many condominium developers have learned, even these safeguards are no guarantee of a litigation-free project.

"Many are going to be sued no matter how much they focus on risk management," Kennedy Clancy said.

While construction litigation can have a chilling effect on condominiums, apartments keep coming out of the ground.

Jeff Bunker, president of contracting for multifamily builder The Wermers Co., said not only is there a plethora of new multifamily projects, "there is an amenities arms race to see who has the best development."

Whether these units will be apartments or condominiums, Brian Cahill, Balfour Beatty Construction division president, said that "millenials can't afford houses and they want to be downtown."

Cahill said he knows of at least 7,000 units in the planning stages in downtown San Diego and that it might not be enough.

"The millenials are coming and they are pushing the baby boomers out," Cahill said.

Nevin, who is tracking as many as 20,000 rental units that are either under construction or in the pipeline around the county, said while affordable units are being built and luxury apartments are going up, apartments aren't being built for those who live in the middle.

"The problem isn't so much that we haven't built enough apartments, it is that we're not building enough Class B Apartments," Nevin said, adding that high fees and land costs make such a project virtually impossible.

Both Cahill and Bunker noted that regardless of whether there will still be an apartment surplus or shortage, finding subcontractors for these projects hasn't been easy.

"They are hard to get a hold of and that's driving prices up," Bunker said.

Cahill said a major reason there is a shortage of subcontractors is young people simply aren't getting into the construction field, which creates a major problem since it takes years to gain the required experience.

Nevin said there is a huge experience and generational gap in construction.

"Either they are unskilled kids or they are over 50," Nevin said.

Bunker said that what is making things even more difficult is about a 20 percent increase in cost for wood framing.