San Salvador ship near ready for a dip

A work of craftsmanship and history has been in the making since 2011 at Spanish Landing, where a 16th century Spanish galleon is being re-created and may soon be ready to launch.

The San Salvador was the flagship vessel of Juan Rodriguez Cabrillo's expedition up the coastline of what is now California, during the latter half of 1542.

Cabrillo died days into the new year of 1543, but not before he had made port in what is now San Diego months earlier. Noting the area to be a "very good enclosed port," Cabrillo is believed to have anchored the San Salvador at what is now Ballast Point on Point Loma's east shore.

For more than three years, the Maritime Museum has kept busy trying to bring a bit of San Salvador's history to the present.

As true to scale and detail as is possible -- using the resource guidelines available and incorporating some modern legal requirements -- the project to build a new San Salvador is not properly referred to as a replica, its creators say, but more accurately a re-creation.

Based on the design of naval architect Doug Sharp, owner of Douglas Sharp Yacht Design at Shelter Island, the new San Salvador build required research that included design details from a 1587 manuscript of Diego Garcia del Palacio on ships of that era.

As the ship is now recognizable for what it is, Sharp said, the museum is looking toward a prospective launch before the end of the year, possibly by sometime in November.

"In the process of designing and building, you always make improvements as you go along, but we've got all the planking in place … and the hull shape is looking really exactly as I had envisioned it," Sharp said. 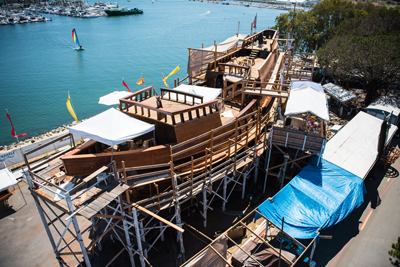 The Maritime Museum is looking toward a prospective launch of the San Salvador before the end of the year, possibly by sometime in November. Photo by Jerry Soto

Although the ship will include required navigation lights not used in the 16th century and a pair of sound-muffled John Deere engines out of sight, for emergency purposes, the ship is expected by academics to be a faithful representation of the era.

Its design incorporates nine species of wood and wood sealers similar to what would have been seen on a Spanish galleon.

A critical milestone, the prospective launch won't quite mean the end of construction activity. Smaller details will be left to finish before the ship is deemed passenger-worthy, including work getting underway now to bring the ship its mechanical and electrical systems.

The ship will also have to be rigged for its sails.

"The rigging will take us all of four months, and then we'll have a couple of months of working her up and sailing her, and stretching things -- making sure we don't break it when we take it into final service," Sharp said.

With the decks and outer planking already in place, visitors can already get a general idea of the ship's final shape. Components such as the ship's wales -- thick planks that will run along the side of the ship to provide its hull with added strength -- are among the parts to be finished prior to launch.

"The hull has framing on the inside," Sharp said, illustrating some of the ship's basic anatomy. "And then there's planking, and then there's wales."

Some of the wales run vertically, others horizontally. Then there are what are called chain-wales -- also referred to in shortened form as channels -- that help support the mast.

Before the new San Salvador is allowed to begin its planned passenger tours, it'll need the green light from U.S. Coast Guard inspectors. Sharp said that process is going smoothly; the structure has generally been checked off the list already while operational systems will follow as the launch draws nearer.

The final check on the electrical and piping won't come until the ship is complete.

The last hurdle will be the stability analysis.

As for vessel operations, Maritime Museum President Ray Ashley said the museum needed to look no further than its staff of sailing professionals to captain the ship. They're already familiar with such ships in the museum's collection as the Californian -- the official tall ship of the state -- and the Star of India, he said.

"We probably have more expertise in sailing ships from many different centuries than anyone else on the planet, and we'll just continue that with San Salvador," Ashley said.

Although a reduction in the paid labor force during the last couple of years led to slower progress from what had been anticipated in 2011, volunteerism from skilled laborers and shipwrights has kept the project afloat.

San Salvador was budgeted for $6.2 million, but Ashley said he wouldn't be surprised if final costs come in around $250,000 less than that.

In the last year alone, the museum logged about 100,000 hours worked by volunteers; roughly two-thirds of the skilled labor force working on the ship has been there on a volunteer basis.