Airport on track for centralized car rentals by 2016

Land on the north side of San Diego International Airport, once occupied by General Dynamics until the late 1990s and most recently used as a parking lot, is taking shape as the airport's new consolidated rental car center.

The 24.6-acre construction project is being transformed for what the San Diego County Regional Airport Authority says will improve airport operations, customer satisfaction and the environment. 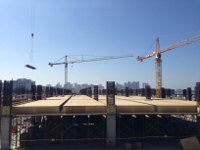 The consolidated car rental center is estimated to cost $316 million and will open in January 2016.

Each of the companies will start out with a 10-year lease and have four five-year options. The center will include 5,000 spaces for rental vehicles.

Consolidating the rental car operations around the airport has been planned since the Airport Authority developed its most recent master plan and environmental impact report, which was certified in 2008.

Since before the facility was designed, the Airport Authority said centralizing of rental operations would help reduce traffic along Harbor Drive, and reduce greenhouse gas emissions.

A 2012 estimate from the Airport Authority said that under the current scheme of spread-out rental companies, rental car traffic accounts for 30 to 35 percent of all airport traffic along Harbor Drive.

A contributor to that traffic is the multiple bus systems in place for the rental companies' shuttles.

The consolidated rental car facility will allow for a single busing system, which will limit rental car-related bus traffic to one route rather than the multiple routes used now.

"This will dramatically reduce rental car traffic on Harbor Drive and the number of shuttle buses circulating around the airport, ultimately providing a better customer experience," Bloomfield said.

The consolidated car rental facility was designed by Burlingame-based Demattei Wong Architecture. Its construction is being managed by a joint venture between Austin Commercial and Sundt Construction.

Estimated to finish for about $316 million, the project broke ground in October 2013 and is to be funded by customer facility charges. A January 2016 opening is expected.

While the view from Pacific Highway has shown the structure taking shape, the exterior architectural façade has yet to go up. Bloomfield said its construction is expected to start in September. The center is being built upon a deep-pile foundation system, which has been visible this year from Interstate 5.

A rendering shows what the facility will look like when complete.

Aimed to achieve at least LEED Silver certification from the U.S. Green Building Council, it's also planned to incorporate landscaping with bio swales.

A topping-out of the building’s concrete is expected by January.

"One of the most labor intensive aspects of the project has been the structural concrete system," Bloomfield said. "The system includes steels, concrete for the foundation, columns, beams and architectural finish."

The biggest challenge with the project, she added, has been coordinating the efforts of multiple prime contractors. Development of the airport's north side has been a focus since the later stages of the Green Build. There are eight projects underway in the area, including road development and improvements.

At the peak of construction so far, the project has included approximately 350 workers onsite, according to the airport. The project is expected to generate 4,600 jobs during construction.