On the northern fringe of San Diego's Little Italy, a gaping hole occupies the site where once stood one of the city's most distinctive landmarks: an art deco restaurant complex swathed in hot-pink paint, outlined by long strips of blue-and-white neon, and topped with a concrete spire that was long emblazoned with the names "Fat City" and "China Camp" in glowing English and Chinese characters in red and gold.

The complex has stood at the corner of Pacific Highway and Hawthorn Street since the early 1940s, starting out as a nightclub that featured performances by big band stars and ending as the half-empty site of a Denny’s restaurant that was demolished early this year as construction began on a pair of six-story hotels operated by Hilton.

But the restaurant and spire will rise again -- perhaps as early next summer -- to be the centerpiece of Hilton's 364-room complex, split between an upscale but midpriced Hilton Garden Inn and extended-stay Homewood Suites hotel. 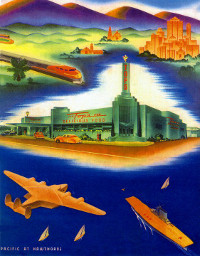 A picture of the old Fat City menu, which shows the restaurant as it looked in the 1940s.

The new edifice won't look exactly the same as the one it replaced, since it will be based on its original Streamline Moderne design from the early 1940s rather than the rosier, more eclectic appearance in recent years.

But it will remain as a nod to San Diego's past as well as a symbol of what can be accomplished when businesses, neighborhood activists, architects and city planners work together to resolve disputes.

Despite a couple of early snags over preservation and zoning issues, the project had a relatively quick run through neighborhood associations, City Hall and the Coastal Commission, after incorporating advice from community activists, city agencies and local businesses.

"They've all had a lot of input into the design and it's all been great," said Jeremy Grant, project manager with Gene Fong Associates, which is overseeing the project, working with T2 Development in Newport Beach as the developer.

Founded in 1941 as Top's Nightclub and Motel, the complex was known as a snazzy getaway featuring performances by such stars as Nat King Cole and Nelson Eddy. But it eventually fell into disrepair until restaurateur Tom Fat took it over in the late 1970s, daubing it in pink, festooning it with nearly a mile of neon and transforming it into a political and culinary landmark.

Fat's China Camp restaurant drew a steady stream of customers with its fusion of Chinese cuisine and Western cooking techniques, while his Fat City Steakhouse became a popular hangout for politicians and community leaders.

But the crowds dwindled after Fat's death in 2007. China Camp eventually shut down and Fat City was leased to Denny's until developer Jonathan Segal bought the site in 2011, with plans to bulldoze the restaurant and create a 232-unit apartment complex.

Segal's plan drew fire from locals, who argued that the restaurant should be preserved because of its unusual architecture and historical significance. Even though the residents failed at an attempt to have the building officially declared a historic site, Segal incorporated the restaurant into his proposed design.

But a much different objection came from Solar Turbines, an energy equipment manufacturer just across the street. The company worried that having residents so close to its factory could expose it to costly new regulations that would disrupt its production plans.

So instead of apartments, Segal proposed that a hotel complex could be built on the site.

To prevent any future residential encroachments, Solar Turbines asked the City Council for a commercial buffer zone around its property, which received relatively speedy approval, getting a green light from the council and Coastal Commission less than two years after the plan was submitted.

As the look and purpose of the project shifted, Segal backed out, eventually being replaced by T2 Development, which has developed and/or operated a number of hotels throughout California, including the Hard Rock Hotel in downtown San Diego, Hampton Inn and Homewood Suites in Carlsbad, and the Residence Inn and Courtyard San Diego in Mission Valley.

The former China Camp restaurant and adjoining retail space will be a relatively small portion of the Hilton hotel complex – 2,500 square feet, compared with 236,500 square feet for the hotels, two pools and spas, multiple dining and meeting rooms, and gym facilities.

But because of public interest in the restaurant, lavish attention is being paid to the design.

In its newest incarnation, the restaurant will have a more prominent position than in the past, directly on the street corner rather than set back behind walls and pavement. It will use the same materials as the old building -- including columns of stacked glass cubes above the entryway -- although the neon will be replaced by high-efficiency LED lighting.

Unlike the old restaurant, it will offer outdoor dining.

But perhaps the most noticeable difference is that it will be based on the 1941 Top’s Nightclub design instead of its more recent version under Tom Fat.

“For one thing, it won’t be hot-pink,” said Grant, although he would not commit to a particular color scheme. The old Top’s Nightclub used several color patterns, including painting the spire in bright yellow. The spire also had a shorter pedestal than the newer version and used a different array than the neon in Fat’s design, which won coverage in national design magazines but was considered garish by some critics.

Bruce Coons, head of the preservationist Save Our Heritage Organisation, said he is quite pleased with the project’s design -- which received unanimous approval from his board -- although he’s waiting to see the final project.

"The bottom line is that things move faster when you work together," Coons said. "The problems arise if you try to impose something on a community without enough dialogue or without trying to address the community's concerns. Here, the developers really worked to identify and address any concerns up front."