Residential units are coming to Fifth Avenue in Bankers Hill, targeting an underserved market and adding density to support the retail community.

“The area has demand far exceeding the supply for both rental and condominiums,” said Alan Nevin, director of economic and market research at Xpera Group.

Leo Wilson, administrator for the Metro San Diego Community Development Corp., said he’s excited about people moving into the area because it will be good for business. Wilson is also the head of Uptown Planners.

“It’s a great example of smart growth,” Wilson said. “What makes a neighborhood so much better is the ability to walk and have a choice of food venues, and you need the residential base to support that.”

Nevin said the demand for the area is “very strong.” He said there’s a segment of the population that doesn’t want to live downtown and likes the idea of being midway between Hillcrest and downtown.

“When I was doing research for Park Laurel, I was able to identify a highly affluent market that was completely underserved,” Nevin said. “ColRich is addressing that market, as is the Mandarin restaurant project, with larger-than-normal luxury condos.” 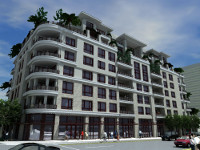 The Vue at 2665 Fifth Ave. will be a seven-story building with 45-unit luxury condominiums over 7,500 square feet of retail. Image courtesy of ColRich

Construction began in June and presales will begin offsite in spring 2015. Prices will be in the high $600,000s, said Graeme Gabriel, chief operating officer. The Vue will consist of 40 one-story residences and five two-story penthouse units. Residence floor plans will range from approximately 1,300 to 3,200 square feet, with two to three bedrooms and two to three and one-half baths.

The Mandarin House site at 2604 Fifth Ave. is expected to be a luxury condominium property developed by Icon Properties. Uptown Planners recently passed the project, said AJ Tangsoc, president of Icon Properties. He expects to receive development permits in the winter and expects to start construction in mid to late 2015.

“Bankers Hill has established itself as an alternative area for downtown growth,” Tangsoc said.

Views of Balboa Park and the bay make the area attractive, Tangsoc said, adding that the “price point is great.” The units will range from the low $700,000s to the high millions. Tangsoc said floor plans are from 1,300 to 3,000 square feet, and the intent is to be high-end luxury.

The Cushman family and Joseph D. Wong Architecture are planning twin midrise residential towers at Sixth Avenue and Palm Street. A 100-unit midrise by Alliance Residential is slated for completion by the middle of 2015.

Hammer Ventures has been redeveloping the Blood Bank building on Upas Street near Fourth Avenue into 35 apartment units.

“I believe what’s going to happen is the beginning of an economic revival,” Wilson said. “I see from Fifth Avenue from the central part, development will start moving north. Eventually we’ll see it going up Fifth to Hillcrest with new development.”

The developments will help support the local economy, but there still won’t be enough density to support the retail community, Nevin said.

“In East Village, for instance, the retailers have really struggled. There are just not enough people to take care of them,” Nevin said.

Nevin said there isn’t enough land to satisfy the demand, and the only way to add density is to go higher, which many planning groups are against.

“Along Fifth and Sixth [avenues] is an area I think putting higher density -- even if it’s a little bit higher -- is a very beneficial thing,” Wilson said.

There’s a 65-foot height limit in Bankers Hill, with a limit of up to 150-foot discretionary, Wilson said. He added that five or six projects over 150 feet were approved through the discretionary process.