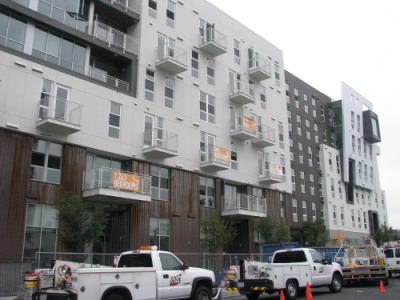 Multifamily residential construction is taking off in East Village, where several projects have been going up this summer.

In the case of a development by Pinnacle International at the corner of 15th and Island, things are going 45 stories up. That and the several nearby projects will, according to Xpera Group's Alan Nevin, contribute to East Village by nearly doubling the neighborhood's existing rental units. Nevin, Xpera's director of economic and market research, said East Village looks to "absolutely explode" in the next five years. He called it a blessing since retailers have been suffering there.

"The point is that East Village is becoming a real neighborhood," Nevin said.

It's in a phase, he said, of adding close to 1,000 units per year for some time, and perhaps adding 8,000 to 10,000 people to its population along the way. And what's in progress now looks to be followed by another wave of projects already, he said.

In development now on the eastern half of the block bounded by Market, G, 14th and 15th streets, is the late-stage construction of a six-story project from Holland Partners and designed by Carrier Johnson + Culture. It broke ground in October 2012 and is expected to open for its first residents in September.

Standing 85 feet above ground, the mixed-use building might have been ready sooner, but Brent Schertzer, development director at Holland, said the project was interrupted by a couple of water main breaks nearby. With the opening coming soon, Schertzer said the building will be distinguished from other developments by its angles and amenities.

The building's un-traditional architecture lent it the name Form 15, symbolizing its distinctive shapes and its location along 15th Street.

"We spent a lot of time and energy on design of the building, creating a really unique massing," Schertzer said. "There are some pretty interesting features. You have these really unique elements that project off the building — a lot of walls that are folded in appearance, have various reliefs."

The project's 241 rental units will total 208,000 square feet, while its lower level will offer 10,000 square feet of retail space yet to be leased. Atypical of similarly situated urban projects, the project includes lush landscaping and a large courtyard, Schertzer said.

"It's on top of soil, not structure," Schertzer said of the courtyard. "So you can plant some really large specimen trees. That's going to be a really spectacular package when all is said and done."

Most of the building's 249 parking spaces are underground, with some visitor parking at street level.

LEED certification wasn't sought from the U.S. Green Building Council, but Schertzer said Form 15 was built to meet California's Green Building Code. That roughly corresponds to the characteristics of a LEED Silver designation, he said.

Some of its environment-friendly features include electric vehicle charging stations, low-flow showers and toilets, and meters for both hot and cold water in each unit.

"So residents can actually see their water use in real time, which tends to help them save water," Schertzer said.

The building's construction offered a few challenges, he added.

Aside from the water main breaks, site preparation took some time as the parcel once housed another building — demolished years ago — that left some soil contamination. Beyond that, Schertzer said construction crews found remnants in the excavation of a river that once flowed into San Diego Bay.

"There was quite a bit of cobble and other debris that we encountered," Schertzer said. "Some minor fossils — shells that we found, we donated to the Natural History Museum. But no bones."

“East Village is the edgy neighborhood everyone wants to be, including our residents," Carroll Whaler, the executive vice president of residential asset management at H.G. Fenton, said. "Urbana will be our 14th community, adding 96 apartment homes to this sought-after urban neighborhood."

Just north of Petco Park, the development's first move-ins are expected in January. Built by general contractor Crane Development, it was designed by Architects Orange as "eco-conscious" on a 20,000-square-foot site. H.G. Fenton said it's the last large parcel in the neighborhood.

According to the developer, Urbana's infill location — next to Basic Urban Kitchen + Bar and surrounded on the north and west by other buildings — was selected in part for its pedestrian- and transit-friendliness. Its architecture will maintain the warehouse feel of the neighborhood and add to it a modern design, featuring a rooftop terrace and spa. The building will include a gaming lounge, open-air community courtyard and a 1,000-square-foot workout facility at ground level.

The building's glass elevator will be in view from 10th Avenue, while its fitness studio is planned to have a retail component available for lease by a private fitness programming company.

The largest project underway in East Village is just a few blocks east of Urbana, along 15th Street between Island and J Streets. Planned to cost $150 million and tower high above its neighbors when completed, the two-tower, 965-unit development of Vancouver-based developer and general contractor Pinnacle International is still growing.

Under construction and getting taller, the first tower stands 30 stories high, with June targeted for its completion up to 45 stories. The project experienced a delay in April when a drywall subcontractor was found to have not received its California contracting license before beginning its work in January.

According to a worker onsite, construction of the second tower, also planned to be 45 stories high, is hoped to begin in 2015. The project may last into 2017. When completed, the two buildings will be among the tallest in the city.

At just five stories in a mid-rise development, OliverMcMillan's Lofts at 688 Thirteenth Street won't be as tall or include nearly as many units as Pinnacle's buildings. But general contractor VCC and the project architects, Pappageorge Haymes Partners and AVRP Studios, hope to draw distinction by way of extensive common areas on the ground level and a rooftop deck. The project, which broke ground in May, has a way to go for completion, but has roughly begun taking shape.

Ground-level residential units are planned to include floor-to-ceiling glass, separated from the sidewalk by gated terraces. The project also includes widening the sidewalk on 13th Street to 22 feet, to create a walkable space with abundant landscaping. Spurlock Poirier is the project's landscape architect.

The building was designed to feature murals from local artists on the upper-level residential spaces. The facades on those levels will include a shifting pattern of windows, changing from floor to floor. Inward-facing apartments at the upper-level will give views to a linear, landscaped courtyard, while inward-facing ground-level units will have direct access to private patios in the courtyard space.

Paul Buss, president of OliverMcMillan, described the project as a "piece of sculpture."

"This thoughtful, architectural development reflects the spirit of the art community of the East Village," he said.

Exposed structural framing dominates the project as seen from Market Street now, but when finished, the project will include 208 midrise and ground-level apartments with studio, one-bedroom and two-bedroom units. They'll range from 620 to 1,300 square feet.

A 9,000-square-foot rooftop deck with architectural lighting, steel and wood trellises, lounge seating, fire pits and an enclosed pet area, will overlook the cityscape. Opposite that, the ground level will hold two retail spaces of approximately 2,660 square feet each

The varied development throughout East Village, Nevin said, amounts to that part of town soon becoming more pedestrian-friendly. The new projects will bring the missing element of residents to patronize existing business, he said, and add opportunity for new business.

"And that doesn't include the potential condominium development," Nevin said. "Right now there is none, but there are several projects that people are thinking about."