The San Diego Unified School District is in the midst of an ambitious effort to renovate and, in some cases, rebuild all its 226 educational facilities.

The $5 billion project is being funded through a pair of bond measures, Proposition S and Proposition Z, which were passed by voters in 2008 and 2012, respectively.

San Diego Unified is the second largest school district in the state -- and one of the largest in the nation -- with 132,000 students and an annual operating budget of $1 billion.

The average age of its facilities, however, is 42 years, and many had begun to show signs of aging.

A new building at Encanto Elementary School has 12 classrooms.

The San Diego Unified School District construction program includes the renovation of existing buildings and school infrastructure along with the replacement of older buildings and updating classroom technology.

"Teaching and learning is changing in the classroom, and these infrastructure improvement bonds help the district respond to the needs of the 21st century learning environment," said Lee Dulgeroff, executive director of SDUSD's facilities planning and construction department.

One of the biggest initiatives of the program involves installing campuswide wireless infrastructure at each school and new fixed wired connections.

The school district recently finished outfitting each of its 5,500 active classrooms with the latest technology as part of its i21 Interactive Classroom Initiative, a program designed to create an engaging and personalized learning environment.

The main components of each i21 classroom suite include an interactive whiteboard, an audio-visual cabinet, a teacher’s presentation station, a wireless voice amplification system, an advanced-model document camera, a classroom DVD player, a netbook or iPad for each student, and a tablet for each teacher.

"You see kids exposed to a lot of that technology at home, and it's pervasive in our society," Dulgeroff said. "Having that exposure in school keeps them engaged and also helps facilitate more efficient teaching and learning."

The Prop S and Z funds also are being used to add air conditioning to 2,000 classrooms and replacing older units with high-efficiency models.

"We're doing a lot of mechanical and electrical work to provide a better teaching and learning environment in these classroom, especially on hot days," Dulgeroff said. "Once the facilities are improved, it will make a big difference in the lives of the children."

The bond program is giving SDUSD officials the opportunity to make their facilities energy efficient in other ways, too.

Developers are using drought-tolerant landscaping while installing synthetic turf that doesn't require watering on athletic fields. More than 50 percent of the district's water usage goes to landscaping, so officials are trying to reduce that percentage through proper design.

Additionally, Dulgeroff said school buildings exceed Title 21 requirements for energy efficiency, and the school is looking at installing solar panels on facilities that don't already have it.

The district is compliant in an energy efficiency standard for schools called the Collaborative for High Performance Schools, which is similar to receiving LEED certification.

In order to minimize classroom disruption and ensure student safety, a lot of the construction is taking place during the summer. Workers are currently achieving approximately $1 million a day in construction productivity, according to Dulgeroff.

"Overall, the program is going well," he said.

Prior to beginning construction on each project, SDUSD officials have held site master planning and design task force meetings, seeking input from stakeholders in a collaborative design process.

"We greatly value community stakeholder input from parents, teachers, neighbors, and members of the community in our design process," Dulgeroff said.

"We think that schools are the heart and soul of the community. They are neighborhood centers and a neighborhood resource. We're working with the city of San Diego to develop joint-use facilities to maximize parks and recreation space." 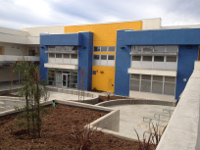 The new two-story classroom at Knox Middle School replaced the portable classrooms on campus and has high-efficiency heating, ventilation and air conditioning systems.

In one of the program's biggest projects, SDUSD is rebuilding Wilson Middle School and Central Elementary on the current Wilson campus. The $100 million project is scheduled to start in 2016.

In another notable project, the district is building a new elementary school in Mira Mesa – named for medical researcher Jonas Salk – which is set for a fall 2015 opening.

Knox Middle School has been completely renovated while the Creative Performing and Media Arts school in Clairemont has received a whole site modernization.

SDUSD has completed about 72 projects at a cost of $288 million. Approximately $200 million worth of construction is in production.

"Everyone is very, very excited to see students enjoying the benefits of a new and renovated facility," Dulgeroff said. "The best day is when you dedicate a new facility. When you can see the positive impacts on the lives of students, it makes all the work worthwhile."