Bottega Americano will be an 8,000-square-foot Italian restaurant in the East Village complete with a market selling cured meats and cheese. Image courtesy Chemistry PR

San Diego’s hospitality industry continues to see growth in the heart of the city as a handful of new restaurants, bars and lounges are slated to open toward the end of the summer.

Some of the most anticipated openings include Bottega Americano, Kettner Exchange, Swine Bar and a new restaurant helmed by a celebrity chef.

Bottega Americano will be an 8,000-square-foot Italian-inspired restaurant with a specialty food marketplace at Park Boulevard and Island Avenue in the East Village.

The interior space pays tribute to 1950s Italian glamour with a blend of modern graphics. Black-and-white tile flooring will depict silhouettes of cutlery and produce on the vine. Stacks of firewood for the stone-fire pizza oven will flank the dining room and nostalgic images of Italian culture will grace the walls.

Communal tables, owners say, will enhance the social experience for all diners.

The marketplace will sell cured meats, cheeses and other foods.

“Bottega Americano will offer something for every dining style: enjoying a leisurely meal out, grabbing a quick bite to go at lunch or entertaining friends at home with delicious, freshly prepared bites,” Van de Velde said.

Bottega Americano will serve breakfast, lunch and dinner daily and is scheduled to open by the end of August.

In Little Italy, an abandoned structure and property at Kettner Boulevard and Grape Street is turning into a restaurant, bar and doughnut shop.

The owners of Firehouse Pacific Beach are creating a similar establishment and vibe with Kettner Exchange, which will have a terrace on the second floor and patio seating.

The 100,000-square-foot eatery will also have green space and a doughnut shop. Jaime Partners -- which recently completed Chad White’s Comun and designed Puesto Mexican Street Food at The Headquarters -- is working on the project, which is estimated to cost $4.5 million.

The owners of Vin de Syrah and Analog are bringing a two-story modern American restaurant to the corner of West Grape Street and Kettner Boulevard in Little Italy. A donut bar will also share space with the 10,000-square-foot-lot. Image courtesy Bluemotif Architecture

“The décor will have trees, wood finishes, lots of green elements with intimate spaces,” said Jaime Partners’ Rodolfo Farber. “It will be very American with a bit of contemporary menu.”

It is designed by Bluemotif Architecture.

Construction is nearing the final stages and the restaurant is scheduled to open in September.

Executive chef Brian Redzikowski will change his menu with the seasons, offering a variety of shared plates, small plates and large plates. His fall menu will include duck confit, tuna tacos, salmon sashimi and short ribs.

Mixologist Adam Stemmler will be in charge of the beer, wine and craft cocktail selection.

The owners of Swine Bar want it to be the new hip spot where University Heights, Hillcrest and North Park converge at 4130 Park Blvd.

The concept is dedicated to all things porcine and will include a menu of shared plates that will change daily, and sometimes a few times a day, depending on availability and popularity of items.

It will feature seven flavors of bacon, exotic sausages and game meats.

Swine Bar will also have a full bar and a market for guests to peruse before or after their meal.

The décor will be a minimalist, clean design with accents of texture and color in a 3,300-square-foot interior. Plans include custom-built outdoor seating and umbrellas on the patio; large, open-air windows for patio/counter seating; vintage school chairs for dining room seating; an exhibition kitchen; and market counter displaying fresh, uncooked sausages and flavored bacon for sale to take home.

Swine Bar will offer a full bar with an emphasis on hard-to-find craft beers (12 taps) and a specialty cocktail menu that follows the savory, salty, smoky, spicy theme. 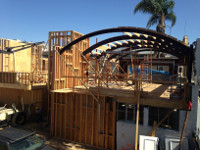 Executive chef Mark Younggren, formerly of The Linkery, and Scott Slater of Slaters 50/50, are the driving force behind Swine Bar.

Slater wanted to open an entity separate from his popular burger restaurants that would push guests “out of their comfort zones,” although he's not trying to appeal to everybody with Swine Bar, he said.

Swine Bar will serve lunch and dinner seven days a week with brunch served on weekends. It is on pace to open in early fall.

Over In Little Italy, Luis Pena and Chef Javier Plascencia from Tijuana-based Grupo Plascencia -- which owns the legendary Caesar’s restaurant, Mision 19 and Romesco in Bonita -- are in the beginning stages of creating a modern Mexican eatery.

Bracero: Cocina Mexicana de Raiz will be a 4,800-square-foot restaurant taking up the first and second floors of the Ariel Suites building on Beech Street and Kettner Boulevard. The first floor will offer casual dining where reservations are not required, and the second will be more high-end.

Each floor will have its own bar.

Pena, the co-owner of the new restaurant, said the second-floor bar will be dedicated to craft liquor from Mexico and feature mezcal and tequila.

Pena said the place will be “casual and classy” and influenced by Plascencia’s existing locations, which serve Baja Med cuisine – which blends ingredients native to the Mexican peninsula with flavors from the Mediterranean and Asia.

The menu will have small and large plates, as well family-style, shareable platters. The beverages will highlight Mexican spirits and Baja wine.

“We will serve Mexican food with a fun experience,” Pena said. “There will mainly shareable tapas with both small and large plates.”

The restaurant does not have an official name at this time. Pena said they are still working on the décor.

“We chose Little Italy because we felt that it was the best platform for us to expose a large group in San Diego to Javier’s food,” Pena said. “We wanted to bring our food and service to neighborhood a bit farther north and let people know what Mexican cuisine is all about.”

Pena said the Mexican restaurant and bar is expected to open in March 2015.

Jaime Partners is the contractor in charge of construction; design is being led by architecture firm Bells & Whistles.