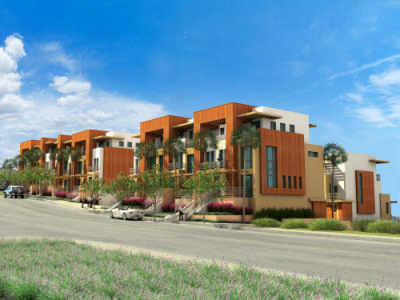 A number of new residential properties around the city will be completed in the coming months, with contemporary designs intended to offer modern amenities, outdoor living and quintessential San Diego views.

A Little Italy mixed-use project of 30 residential units and two blocks of commercial space, one with 3,500 square feet and the other with 1,400 square feet, is nearing completion. The project was previously known as Legacy Apartments, but is now called Olea. It’s on West Juniper Street between Kettner Boulevard and India Street.

Just three of the 30 apartment units were still available as of Aug. 1, according to Clauson. “We’re very pleased with how quickly they leased up,” he said.

The complex with an interior courtyard offers a mix of studio and junior one-bedroom apartments, starting at $1,625 monthly.

Also in Little Italy, the Ten on Columbia urban in-fill project at Columbia and Hawthorn streets is set for completion this fall. The project is being co-developed by Canter Development, Legacy Real Estate Ventures and InDev, which also did the architecture.

The 10-unit project replaces three single-family homes and a billboard on a 5,000-square-foot corner lot. The units range from 650 to 1,350 square feet, and include floor-to-ceiling windows, high ceilings, patios, and some views of the waterfront and city skyline.

FoundationforForm Architecture & Development’s revamp of the former North Park Post Office will be completed this summer. The mixed-use project, called You Got Mail, has 33 apartments, 6,000 square feet of retail space, and a bocce ball courtyard.

FoundationforForm is operating as the project’s architect, developer and property management. Firm principal Craig Abenilla said in late July that construction is nearly complete, with landscaping being installed.

The project takes its design cues from its former life as a post office, including maintaining some of its old signage, but with modern touches including perforated metal façades.

The first two phases of construction for Point Loma’s Waterpoint are underway, with a grand opening slated for early 2015. The model and sales gallery will open in December, according to ColRich director of sales and marketing Kelly Hiltscher.

The 40-unit project includes two- and three-bedroom condominiums of between 1,300 and 2,300 square feet with views of the San Diego Bay and downtown San Diego skyline, priced from $700,000 to more than $1 million. Amenities include balconies and underground parking.

LIV Capital Group is building the Golden Hill Row Homes project, with 32 detached row homes and a private park space on a 1.45-acre site bounded by 28th, 29th, B and C streets. The $24 million urban infill project was designed by H2A Architects to include “green” features such as solar power, energy-saving appliances, and drought-tolerant landscaping, according to project spokeswoman Samya France.

The project sits where there were once four separate lots, two of which were vacant and two of which had houses, France said.

The contemporary-style row homes will range in size from 1,587 to 2,293 square feet, and will be priced between $600,000 and $700,000. Amenities will include two-car garages, multileveled living spaces and private terraces with horizontal sunshades.

The first phase of construction could be complete in spring 2015, with the second phase set for completion in fall 2015.

In Cortez Hill, Phoenix-based architect/developer Bruce Gray of Gray Development is building 939 apartment units on the block located between A and B streets, and 8th and 9th avenues, where the Brake Depot building and parking lot used to be.

The first tower could be done by Spring 2015, with construction for the second tower to be completed in 2017.

The massive project sits between two of downtown San Diego’s largest full-block developments: the Symphony Tower and Sheraton Tower project to the west, and Vantage Pointe to the east.