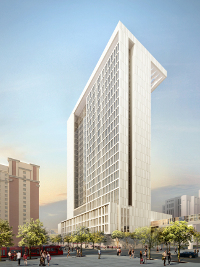 A modern facility on Union Street will replace the San Diego County Superior Courthouse on 220 W. Broadyway, a building that dates to 1961. Courtesy image

The parcel of land once home to King Stahlman Bail Bonds will eventually hold the San Diego County Superior Courthouse.

Excavation work is taking place on the site at 1100 Union St. and is expected to be completed by September.

Then workers will start pouring the foundation and begin steel work close to Thanksgiving Day.

It will be 704,000 square feet and feature 71 courtrooms, a new jury assembly room, staff offices, a café, a supervised waiting area for children and a coffee stand on the ground floor.

A pedestrian walkway will connect the courthouse to the county Hall of Justice at 330 W. Broadway.

It is the largest project within the San Diego city limits, and there could be up to 850 people working on the site and up to 40 supervisors, Mills said.

Particular challenges for Rudolph and Sletten are building alongside the rail line and obtaining agency approvals, but Mills said it's "really going to be an on-time delivery project" -- meaning materials will be put to use after arrival.

A groundbreaking ceremony was held in early March for the new courthouse, which officials say will be a prominent addition to the downtown skyline, allow for improved telecommunications and better physical separation between the public and in-custody prisoners -- the latter will be transported in separate elevators, rather than being walked down a public corridor.

The state determines whether a courthouse is needed based upon a study, and "this was one of a very high priority," said Presiding Judge David. J. Danielsen.

"You get a benefit from consolidating three buildings into one," he said, adding that will allow for a more responsive justice system and management.

The entire project, financed through revenue bonds, will cost $555 million; $447.3 million of that covers the cost of construction.

"We in San Diego are lucky to have the state doing capital investment in this community," Danielsen said.

Along with prisoner transport, problems with the existing courthouse include maintenance costs, potential damage from an earthquake, and asbestos – which Danielsen described as "one of the worst [cases]."

The new building will also replace the family courthouse on Sixth Avenue and the smaller Madge Bradley Courthouse on Fourth Avenue.

The state’s plans for those two buildings are under consideration, said Clifford Ham, principal architect for the state of California Judicial Council, which is responsible for courthouses across the state.

Ham said the Judicial Council expects the new courthouse will be ready for occupancy at the end of 2016, but Superior Court officials will decide exactly when staff moves in and begins hearing cases.

The new courthouse design can be credited to Skidmore, Owens & Merrill.

The building is designed to use 15 percent less energy than a building of the same size.

Other features include LED lights, a public corridor heated and cooled by a radiant (or convection) system, and air conditioning that uses a chilled, centralized water system.

While there is no public art planned at this time, the building has décor, including wooden benches, that “will lend character and dignity to the spaces, while carefully spending the public money and looking at durability and maintenance,” Ham said.

Ham said the state is still considering a plan for demolishing the Broadway courthouse, but no date has been set.