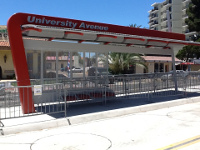 Just more than a year ago, the infrastructure project to bring bus transit service likened to a "trolley on wheels" through the Mid-City neighborhood broke ground.

Originally planned to begin service in June, the $44 million project experienced a slight delay after construction crews encountered some unexpected finds underground and were slowed down by rainstorms in February. But according to the project's administrator, the San Diego Association of Governments, the Mid-City Rapid 215 bus line is looking good for an opening Oct. 12.

"We're in the home stretch," said Jim Linthicum, SANDAG's director of project implementation, who estimates a ribbon-cutting ceremony in October. SANDAG has been working with general contractor West Coast General Corp. and Simon Wong Engineering to build the project since last June.

Another of SANDAG's three planned Rapid routes, its Interstate 15 Corridor Express Lanes project, began service in June. Construction on an expected third service area in the South Bay has yet to start.

One of the most high-profile features of the Mid-City Rapid project is the transit-only lanes on Park Boulevard between University Avenue and El Cajon Boulevard. In order to build these lanes, the center median of Park Boulevard had to be demolished and completely reconfigured. Photo courtesy of SANDAG

The Mid-City Rapid project area, which spans across parts of North Park, Normal Heights and Kensington, cuts through some of the city's older neighborhoods. That led in part to the project's short delay, Linthicum explained.

"As much as you try to figure out everything that's below ground, it's tough," he said, when older neighborhoods are being dealt with. "We hit utilities that weren't on anybody's utilities maps."

Instead of clear dig areas, construction crews ran into some nostalgic signs of San Diego's history.

"Believe it or not, on Park (Boulevard), we actually hit the old railroad that the old street cars used to run on down there," Linthicum said. That wasn't on the maps.

According to Eric Adams, project manager for SANDAG, the tracks had for years trapped moisture in some areas, causing difficulty during excavation and ultimately delaying the project as they had to dry out.

The signs of San Diego's early transit are being replaced with a 10-mile stretch of improvements to bring a more trolley-like bus service for perhaps the next 30 years. The same corridor may actually see a return to tracks by the late 2030s. It won't be for a return to streetcars, but rather an expansion of the region's light rail trolley system, planned for in SANDAG's long-term Regional Transportation Plan.

"We can't afford to do everything immediately," Linthicum said, calling Mid-City Rapid a great way to improve transit in the corridor while the region continually works to secure funding for its long-term trolley goals.

SANDAG has indicated that the new Mid-City Rapid line is expected to attract between 7,000 and 9,000 riders per day within its first year. One of the reasons the Mid-City line was chosen years ago as a Rapid route was because the corridor between San Diego State University, downtown San Diego and points in between is so heavily trafficked.

Running generally west-to-east, the route will include 17 transit stations and pass from Santa Fe Depot east to City College, north past Naval Hospital San Diego along Park Boulevard and east along El Cajon Boulevard. At College Avenue, the route turns north to its eastern terminus at SDSU's Transit Plaza.

SANDAG knew it had to do something to improve such a transit-dependent corridor, Linthicum added, and the Rapid line could be planned and completed in a much shorter time than the bigger trolley projects on the horizon. SANDAG spokeswoman Helen Gao said the project will also improve service to such heavily visited destinations as Balboa Park and the San Diego Zoo.

"It's going to have lots of amenities like you see in a trolley system," Linthicum said.

Like a trolley stop, the stations will provide shelters with real-time arrival information on LED displays and include information kiosks.

According to project manager Eric Adams, a key to Mid-City Rapid's success will be the project's traffic signal interconnection development. Along El Cajon Boulevard between Park Boulevard and College Avenue, a new transit signal priority system and improved synchronization of traffic lights are being developed to improve bus speed and reliability.

Other street upgrades have been completed, Adams noted, such as new landscaping and improved street lighting. More than a dozen decorative streetlights -- painted Nason green to match the color theme of El Cajon Boulevard -- have been installed along the road between Texas and Kansas streets.

Other areas were provided new streetlights as well, and many sidewalks were replaced, widened or provided curb ramps. The project also includes new dedicated transit lanes on Park Boulevard between University Avenue and El Cajon Boulevard.

A total of 18 new low-floor, compressed natural gas-powered articulating buses, consistent with SANDAG's new design for the Rapid bus lines, have been designated for the route. The buses will run every 10 minutes during peak hours on weekdays, and every 15 minutes during off-peak hours and on weekends. While Linthicum said such a fast schedule and the more comfortable and technologically advanced shelters will make the route more trolley-like, keeping buses from nearly lapping each other on the route is the purpose of the traffic signal interconnectivity.

"The key to keeping (the buses) from stacking up is keeping them on time," Linthicum said.

The traffic signal priority will be a subtle change for drivers and likely unnoticeable, he said, but will have the ability to hold a green light momentarily if a bus is recognized by the system as approaching the light when it's about to turn to yellow.

Mid-City Rapid was one of the major corridor projects included in the TransNet Extension Ordinance approved by county voters in 2004, extending the regional half-cent sales tax for transportation administered by SANDAG. About half of the funding for Mid-City Rapid is coming from TransNet, while the other half was funded by the Federal Transit Administration.