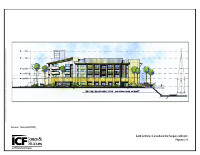 Plans for a four-story hotel at 955 Harbor Island Drive are on hold because of a lack of policy regarding affordable lodging on port tidelands.Image courtesy of ICF Jones & Stokes

A four-story, 175-room hotel on East Harbor Island proposed by Sunroad Asset Management Inc. is in limbo until stakeholders and coastal authorities can figure out how best to offer affordable overnight accommodations with a priceless waterfront view.

The proposed $30 million Sunroad hotel would cover about 117,000 square feet, with lodging, meeting space, fitness facilities, an exterior pool and surface parking. The limited-service hotel has been described as being of similar quality to a Courtyard by Marriott or a Hilton Garden Inn. The 955 Harbor Island Drive leasehold property overlooks the 600-slip Sunroad Resort Marina.

The Port of San Diego approved Sunroad’s plan in March, but hit a snag when it tried to make it a component of a larger Harbor Island overhaul. The Port had sought to amend its master plan to allow for up to three hotels of no more than 500 rooms on east Harbor Island, but withdrew its application with the California Coastal Commission after an almost two-hour discussion at its July 9 public meeting. At issue is whether enough lower-cost overnight lodging is being made available on public tidelands as part of the plan.

The Port may resubmit the East Harbor Island application at a later time, but isn’t expected to dramatically retool its request, according to Port of San Diego public information officer Tanya Castaneda. Rather, the onus is on Port officials and Sunroad executives to work with coastal commissioners to address their affordable lodging concerns and perhaps formulate a rental-restrictions policy to guide future hotel development.

Sunroad’s Vice President of Development Tom Story said discussions are in the “exploratory phase,” but that he’s optimistic a resolution can be reached “that is acceptable to all parties, in a time frame that is quicker.”

“It’s a work in progress,” Story said in a late-July interview. “If we are successful, we’ll be back in front of the Coastal Commission in less than a year.”

Hotel construction, once it begins, could take from 12 to 15 months, he said. Sunroad had intended to begin construction in mid-2015.

Story cautioned that the lack of a formal policy on lower-cost lodging along the port tidelands could stymie future area improvements. “If we can’t figure out a way forward, it’s effectively a moratorium on hotel development,” he said.

The Port of San Diego has a lot riding on the proposed Sunroad hotel. Traffic, underlying utilities, and a public promenade that connects to Island Prime and Reuben E. Lee restaurants would be realigned as part of the Harbor Island Drive project.