From quarry to mixed-use community, Civita comes to life 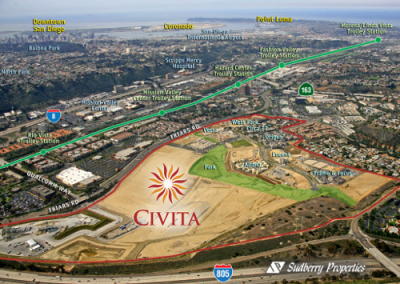 San Diego-based Sudberry Properties’ senior vice president Marco Sessa stood atop a newly paved cul-de-sac, taking in the expansive view below of what will be the $2 billion Mission Valley mixed-use project Civita. Some of the residential projects, like the Lucent condos and Circa 37 apartments, are complete and gleaming. Others, like apartment complexes Versa and West Park, rattle with construction noise. What will be a 19-acre community park is still a long wedge of dirt. Civita’s future business district is today occupied only by concrete manufacturing, a hint of the quarry operations that occupied this land for about 70 years.

Sessa has been in charge of all aspects of Civita’s development since 2002. That was three children and all his gray hair ago, he joked.

After years of negotiations with the community, city officials, the Grant family who owns the property and homebuilders, the 230-acre master-planned community is starting to take shape. Commuters along Friars Road and Mission Center Road can’t help but notice the expanse of newly graded land. Within Civita, some people have lived here since 2011. On a recent August afternoon, residents lounged by Circa 37’s resort-style pool while -- just beyond the hedges -- a jackhammer chipped away at concrete.

When all is said and done, Civita will be the size of some small towns: 4,780 homes, ranging from senior studio apartments to midrise condos to single-family detached homes, with 480,000 square feet of retail space and 420,000 square feet of office space.

Civita shares its name with a hilltop town in southern Italy; Sudberry Properties officials said the moniker was intended to draw from the roots of Latin words for “civic and community” and “vitality and life.” The Mission Valley community was known up to 2010 as Quarry Falls.

Sessa said the homebuilders are working from a strict set of architectural guidelines intended to maximize outdoor space while conserving natural resources like water and electricity. Each community has a different look, but the design is intended to be both modern and timeless, he said.

A maintenance assessment district, or MAD, is assessed on Civita property owners to allow the communities to have features otherwise not provided by the city of San Diego. Some MAD-funded features will be subtle, like wider sidewalks and slightly nicer street lights, curb ramps and sign posts than the city typically installs and maintains.

More prominently, the terraced parkland will be unlike anything in Mission Valley to date. With construction to begin this fall, the city park is expected to include water features that will aid with drainage on the site, an amphitheater, a dog park, sports courts, picnic areas and a community garden.

“We’re trying to meet the wants and needs of a broad community,” Sessa said.

Also on the Civita to-do list is a pedestrian bridge over Friars Road for better access to the San Diego Trolley and further negotiations with potential retailers and office tenants for the commercial side of the project. Commercial space will be built to accommodate anchor tenants, Sessa said. Major tenants could include a movie theater, grocery store and restaurants.

Sudberry Properties is also working with the San Diego Unified School District to determine if a school can be incorporated into the project. Discussions have varied widely over the years, according to Sessa, with talk of either an elementary school or a middle school, and whether it might be a charter school or a more traditional public school.

Maximum build-out is still on the distant horizon. Sessa estimates it could be 2025 before all the elements of Civita are complete.