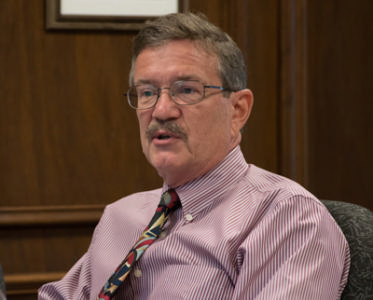 Construction work in San Diego has been picking up at a slow-to-moderate increase since the recession ended, but there are still challenges ahead, executives said at a recent roundtable discussion at The Daily Transcript and sponsored by Kitchell.

Most participants said their work is coming from schools, parks and government entities in the public sector. Officials from higher education, public health and transportation discussed their upcoming work.

Brad Fenton, director of planning, design and construction for California State University San Marcos, said a new gymnasium for the school’s basketball team is on the way. The university was recently admitted into the NCAA candidacy program.

“It’s a very important project for student life and the campus overall,” Fenton said, adding that the university is also looking at long-range planning for student housing and an applied sciences and technology building.

Bob Schultz, associate vice president of real estate, planning and development at San Diego State University, said student housing will be the university’s biggest push in the next six years.

“We are doing some conceptual planning for the west side of campus for additional housing there,” Schultz said. “This will be based on the commitment we make for sophomore housing. We are pretty outfitted for freshman.”

Palomar Health is starting on the programming for an inpatient rehabilitation facility on its Palomar Medical Center Campus.

Abbassi also said the transit district is working with the San Diego Association of Governments on projects for the next 15 years for areas between Orange County and San Diego County, amounting to about $1 billion.

“On the public side, we are starting to see money come back into the system and (their) ability to plan for long-term capital projects, but they are slow to release the money,” Cohen said. “They might have funding for the first part of the project, but not the whole thing.”

Schultz said, at least for higher education, the challenge is the steady decline in state funding.

“There are planners that say about half of universities will cease to exist by 2040-2050” because of funding cuts, Schultz said. “We are a state university that gets about 16 percent of our funding from the state, and that’s been in a pretty (bad) state of decline.”

Schultz added that public universities are in a transitional rather than a growth mode. State universities will have to keep increasing tuition gradually and become more like research institutes to drum up more private funds.

“Our new academic buildings will be more of a research facility, where greater grant funding can be generated,” Schultz said of the future designs of classroom buildings.

Dave Gilmore, principal at the architecture firm LPA Inc., said there are more kindergarten-through-12th-grade school districts and community college districts developing new master plans for their campuses and asking for voter-approved bond measures to fund classroom buildings and other facilities.

“We just had a deal where we thought we had a contract at X price, (but) somebody walked in two days before we were suppose to sign the contract and was willing to do it for 50 percent less,” Austin said. “That hurts. I don’t know who it was, but apparently they are a reputable firm. So that is still happening.”

Austin emphasized the need to be strategic in pursuing projects and putting together proposals because it will cost roughly $150,000 to bid for multimillion-dollar jobs.

Thai Dinh, associate principal at Mascari Warner Architects, said his firm sees a strain in budgets for health care providers, which is leading to uncertainty in new projects.

“Through the first six months of the year, the enrollment rate isn’t where it is expected,” Dinh said.

He added that health care providers are renovating facilities rather than building one ones.

So what will it take to improve the local construction industry?

Panel members said their challenges are leading to new ways of thinking in the construction industry, and that collaboration and relationships are the way to go.

Cohen mentioned that being local and having a stake in San Diego helps Kitchell receive work with potential clients.

“Local matters here. It’s very important,” said Cohen, who grew up in San Diego. “We are asked the question all the time, ‘Are you local? Are your people local? Where did you go to high school?’ Those things come up with potential clients.”

John Gavin, affiliate at KPFF Consulting Engineers, said there is a strong sense of community in San Diego.

“Because of the strong relationships that are in the community, and in the design, construction and owner community, it’s led to some incredible (projects) like at UCSD, Palomar Health and San Diego State,” Gavin said.

“You can’t burn bridges. Eventually, you are going to be working or want to be working with someone in this room,” said Bill Magnuson, principal at Mosher Drew Architects, whose firm is designing a Mission Hills/Hillcrest Branch Library.

Even though a company might not be headquartered in San Diego, it helps to have a local office to get jobs, Austin said.

“People are looking for California design and construction thinking and creativity,” he said.

Knowing how to design sustainable facilities and build in varied terrains and temperatures, is important to other areas of the country.

“The future is going to be, ‘How do we maintain our resources,’” Gilmore said. “What California brings, and San Diego in particular, from its aggressive policies on land planning is of great value to other regions.”

Gilmore predicted San Diego will be positioned better because of smart growth.

“We are seeing some really smart decisions about real estate right now that is telling us San Diego is going to be in a very good spot in about six to 12 months,” Gilmore said.

Retention and the ability to get the next generation interested in a career in architecture, engineering and construction will be essential.

Dick Crowley, senior vice president at Kitchell, said as a company and an industry the key is constant reinvention and finding new and better ways to deliver services to attract new talent at the middle and high school level.

Schultz said architecture has become less interesting because of the paperwork to get a license.

“Last year in California, over 2,200 architects surrendered their license because they are retiring. No scandal there, they just decided they are not going to practice actively anymore,” Schultz said.

“And we newly licensed 500 [architects]. You follow that trend line and add the fact that a well-paid architect is a poorly paid anything else. I think it’s going to be a real challenge finding conceptual and design talent to drive the industry.”

“Companies need to offer internships and go to the elementary, middle and high schools and show them examples of the impact designers and contractors having on building a community,” Dinh said.

Related article: Owner – Be the best you can be!