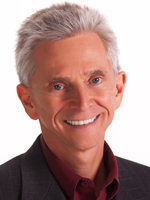 In Dallas and other western U.S. cities, 40 year-old multifamily structures are typically demolished and replaced by new construction. San Diego’s zoning and slow growth policies have combined to restrict apartment construction for at least the next 30 years. In addition, San Diego has down-zoned most of its apartment parcels; a nine-unit building in North Park will not be demolished because only a five-unit building would be permitted to take its place. San Diego demands more parking and results in fewer apartments allowable. Roughly 75 percent of San Diego County’s apartment parcels were built prior to 1980 (see graph).

Thus rebuilding is not economically feasible for most multifamily apartment owners. But this truth reveals an intelligent opportunity for the savvy owner — a low risk, but profitable move: upgrade and reposition the apartments. 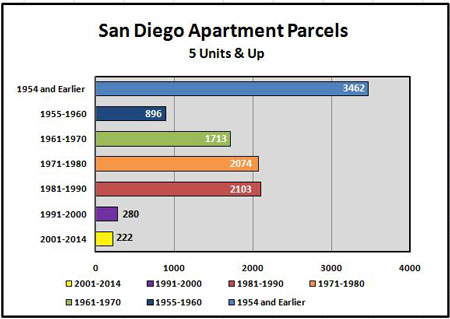 Revive and update what exists

In many San Diego County ZIP codes such as El Cajon, North Park, Escondido, or Chula Vista apartment buildings cost from $110k to $180k per unit. Rents on 1970-era products are fair, given the condition of the buildings. But often it is possible to invest another 8%-10% per apartment in a way that will boost the rents received by 20% or more.

For example, the market will pay 14 times the annual rents to purchase a building in North Park (A building that brings in $100k annually sells for $1.4M.) Easy renovations of $120k not only increase equity, but also can boost a landlord’s income to $120k. This wise investment results in an increase in property value to $1680k (or 14 times new income of $120k). In effect, $120k in upgrades can create more than $240k of extra value. These are conservative numbers; often the rents or the multiple can be more than is described here.

What kind of upgrades are we talking about? Simple but prudent ones: exterior paint with a main color and two accents, stainless steel sinks & appliances, new faucets, fixtures, ceiling fans, towel bars, knobs and drawer pulls that all match, say brushed nickel, upgrade flooring and window coverings, an accent wall for the living room, baseboards and maybe crown molding. In other words, a wise apartment owner does not have to rip out all the kitchens and bathrooms and install costly new granite countertops.

This proven strategy boosts income and wealth. A superb property manager and a wise broker can help you find and act on such opportunities—very achievable, because there are thousands of apartment buildings that are still in near-original condition in San Diego County.

Over the last generation, I have been fortunate to serve more than 100 families who have become millionaires with this approach. This strategy is one of the best I know of to create value in apartment ownership. What is your best idea? Contact me.

Previous articles discussed: why San Diego has less risk than most other major cities; why San Diego apartment investing is like a conveyer belt to wealth building; and two laws that almost guarantee safe income and limit competition.