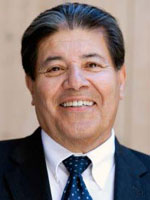 With more than three million people in San Diego, the U.S. Census indicates that there are over 65,000 people who are blind or visually impaired. Like many organizations and companies, Braille Institute is always looking for ways to reach new students at the right time with the right message, so that the potential new clients can access free services.

Adjusting the inside for outreach outside

“We found ways to develop programs that responded to needs we uncovered in the community,” says Richard Ybarra, Executive Director of Braille Institute San Diego.

In response to feedback from the Hispanic community, in Fall 2013 Braille Institute San Diego began “Spanish Fridays,” offering Spanish-language classes in mobility, technology, music, band, cooking, and more. Now students who began participating at Braille Institute through Spanish Fridays are taking part in ESL classes at the center the rest of the week. To further engage the Latino community Braille Institute hosted the first eye health fair ever held in San Diego, offered in Spanish last year, drawing over 900 attendees.

Connecting through outside groups

To foster increased engagement, Ybarra and his team employed a strategy that identified ten target groups and populations to connect with; including seniors, health associations, government agencies, elected officials, nonprofit and health organizations, businesses, education entities, other organizations working to support the visually impaired community, and the Latino community. During the past two and a half years, over 3,000 people from those groups have connected with Braille Institute, and many have become Braille Institute’s partners, including the San Ysidro Health Clinic, Vision of Children, Department of Rehabilitation, and the VA.

“Community outreach really helps everyone,” says Ybarra. “Everything has to be a two-way street. Contacts are different than connections. Connections mean we come up with a plan to work together. It’s been exciting to see how our contacts are becoming connections, which in turn are creating stronger communities of support for everyone.”