Developers can't keep up with demand for apartments 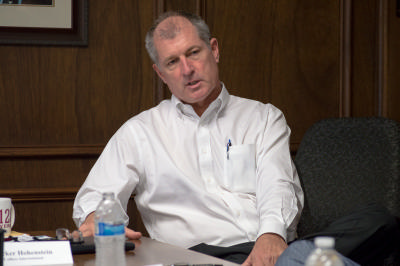 Some of San Diego County's office and industrial markets are tight enough to justify speculative construction, while developers may never be able to build enough apartments here to satisfy the demand.

Those were a couple of the conclusions drawn during a recent roundtable discussion at the The Daily Transcript.

"The countywide industrial vacancy is now less than 10 percent. It is 12 percent on Otay Mesa. It was 30 percent there during the recession, and Poway is only 3 percent vacant," Hohenstein said.

Despite the lower vacancies, Hohenstein said lenders haven't been ready to commit to new industrial construction.

Hohenstein said his firm has tracked about 140 industrial property sales thus far this year, a roughly 30 percent increase over the like period in 2013. About 80 of these sales were to owners and users. The remaining 60 were to investors.

"This is well below the pre-financial crisis figures of 600 per year," Vallera said.

Terry Moore, ACI Apartments senior vice president and principal, said there is a huge imbalance between the demand for these units and what's on the market.

"On the investor side there are 20 who want to be buyers for every one person who wants to sell," Moore said.

Northbrook said with all the competition, "we're having a tough time finding suitable real estate."

Simon Terry-Lloyd, a Cresa San Diego vice president, was also concerned about the availability of decent commercial properties regardless of their asset class for the buyers/tenants he represents.

"We looked at a commercial deal for two years and it ended up having a 70-year ground lease," Terry-Lloyd said.

When asked why many buyers are purchasing apartments and condos when it might make more sense to wait, Vallera said the biggest reason he is seeing is the death of a spouse.

"That is the single-largest triggering event we see," Vallera said.

Tax-deferred exchanges have long been a vehicle for transacting commercial real estate, but they don't seem to be getting any easier.

"We don't want to be unable to find the up-legs (replacement properties) in these transactions," Ghio said.

Both Vallera and Bohlken said a lack of land and excessive regulations have resulted in higher rents that in turn have pushed would-be renters into neighboring states.

"When we were at the bottom of the market, investors ran to Arizona and Nevada," Bohlken said.

With a limited number of opportunities here, Bohlken said, these investors have returned to Arizona and Nevada again.

Long before those terms have run their courses, commercial mortgage-backed securities will begin maturing once more. This category all but disappeared during the recession.

While owners worry about existing properties, speculative commercial development is beginning to dawn. The Irvine Company's Donald Bren is already building the 306,000-square-foot One La Jolla Center in the University Towne Centre area, despite owning about 2 million square feet in the same subarea.

Northbrook said he expects this property will perform well, despite having little initial preleasing activity, because of its location and the fact it is new.

Northbrook added that R. Michael Murphy, the long-time Otay Mesa developer, has also made a strategic play with his acquisition of 30.9 acres in the Scripps Ranch Business Park for $28 million. Murphy is still determining just how much to build. The land was last owned by Intel Corp. (Nasdaq: INTC) and originally planned for a 1 million-square-foot campus for the technology giant, but the project was never constructed.

Whatever commercial and industrial properties are constructed in the future, all agreed that much less square footage would be needed to accommodate the same number of workers, as many companies go digital -- eliminating the need for file cabinets -- and desire more colloborative workspaces.

"And we went paperless a few years ago," Jacquet said. "All of our invoices are electronic. They are just scanned."