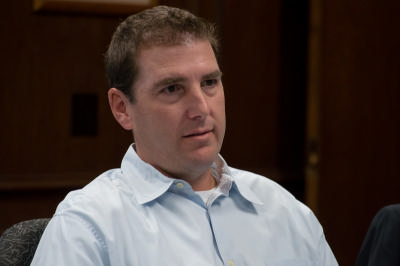 Local contractors, designers, engineers and consultants are seeing improvements in the construction industry with more work and request for proposals coming in, but more integration is still needed to improve project efficiency, they said.

These construction officials who attended a roundtable discussion Nov. 6 at The Daily Transcript said that on average, business and workload is up about 25 percent from the beginning of this year.

Chuck Hope, principal at Hope Amudson, said his company saw a record year in terms of work last year and that the second half of 2014 continues to be strong.

“We are now exceeding our goals,” Hope said. “We got a great backlog and we are slammed though the end of the year.”

Hope says owners and developers are now more confident in the economy and are the first to either purchase vacant property or buildings and construct/renovate projects before land prices go up.

Allan Trowbridge, senior associate at Ferguson Pape Baldwin Architects, said his office is seeing an uptick in workload and has reached a point where it can turn down projects if need be.

“We are in a position where we can be a bit more picky on the projects we go after now, which is nice, as opposed to just going out and bidding after anything and everything that is out there,” Trowbridge said, adding that work is coming from San Diego as well as Texas, particularly in tenant improvement projects.

Doug Stewart, mechanical engineer and project manager with EXP, said his firm is seeing a lot more owners in the health, sciences and biotech markets putting out more request for proposals for new laboratory and research facilities, and expansion projects in San Diego and San Francisco.

Stewart said his firm is having a hard time finding qualified mechanical engineers.

“There is a lot of competition for new graduates,” he said. “You have a lot more design-build firms wanting to have engineers on staff.”

Hope added: “We don’t have people knocking down our door looking for a job like we did two years ago.”

“There used to be a sunshine tax,” said Steve Shirley, president at University Mechanical & Engineering Contractors Inc., referring to the high price paid for living in a desirable climate, “and companies could pay graduates right out of college less money. That’s not true anymore.”

Hope said his firm is raising salaries and wages because of the competition for engineers.

“People are just worth more in this industry,” he said.

Walt Kanzler, director of design at Qualcomm Inc. (Nasdaq: QCOM), said it took him six months to hire an engineer because the applicant had multiple job offers.

Kanzler said there are engineering teams at Qualcomm working on new technologies for the building information modeling processes to provide better integration with designers and builders to share information and save time during a project.

Some of these tools include a specialty website that will have a technical manual with all the information of the design, construction and maintenance of a facility that can be accessible to any member of a project via a smart phone, tablet or computer in real time.

“You have a complete representation and record of a building, just through a couple clicks,” Kanzler said. “We use [Quick Response] tags but now we are starting to use [Near Field Communication] tags to register [the information]. You can scan the tag and it will take you right to the submittal [of a project] so the guys that are in the field can use it.”

Kanzler added that Qualcomm's engineering and design groups have also looked at integrating Oculus Rift, a virtual reality headset for 3-D gaming and Google Glass into the construction field so that contractors and designers can virtually see the details of a facility.

“It’s been an amazing opportunity as an architect to work with the engineering teams on developing smart building technologies because they are in that market, they are looking at how wireless can transform building systems,” Kanzler said.

The seven participants at the roundtable discussion said too often the term “building information modeling” is used incorrectly or incompletely. It’s not only using software and new technologies to create 5-D models of a project, but also an entire process.

Nick Bokhoven, virtual design and construction leader with DPR Construction, said building information modeling is a progression by the people on a particular project that define the scenarios to complete a building or facility.

Shirley added that using building information modeling the right way can save owners money on their project, but they have to set the project's overall goal and be engaged throughout the process, so that everyone is informed and time is not wasted should problems occur during design and construction.

“It goes back to a [building information modeling] execution plan and how important that document is upfront, and how painful it is to generate one of those because all stakeholders need to have some input to know who is responsible for what and when. It can get very complex, but just having a plan in place that everyone agrees to is really the beginning for a successful project,” Trowbridge said.

Marcus Webb, executive vice president of CnA Consulting Group LLC, sees Southern California as having the most advanced knowledge of building information modeling contracting across the country, but the display of value still needs to be more evident.

“From a client’s [perspective], once you put a building up, it’s a model. The information and the model is only as good as the accuracy of the model,” Webb said. “I haven’t heard enough stories yet of the value of taking that model into an operational perspective and seeing the return on investment.”

Webb added that the key is having the data updated in real time every day after the facility is fully operational.

Stewart said his company is also having trouble creating a model that will update potential building issues and wear and tear of parts in real time.

“Typically you don’t see owners putting down the investment to have a full-time guy be dedicated to running the model and keeping it up to date,” Stewart said. “That’s an investment on the owner’s side and is there a return on that? Hopefully, in the life of the system, it is.”

To make projects more efficient, roundtable participants also said there needs to be better software that is designed for architects, engineers and contractors or different software that can work with one another so that partners on a project can easily integrate their work from one contractor and designer to another.

“It’s challenging when software can’t integrate with one another and transfer construction plans and drawings from an engineer to an architect and contractor,” Bokhoven said. “This can save time to where architects and engineering can have more time to create new data rather than waste time just on transferring data.”

Kanzler said there needs to be a sensor code that would allow different software to talk to one another and allow for more integration and improved project efficiency, one of the key goals of building information modeling.