Going off the grid 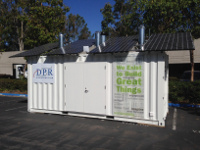 DPR Construction turned old shipping containers into mobile offices that can be used on work sites. Called an O-GO, or off-grid office, these standalone units run on solar power and a connected battery. Photo courtesy of DPR Construction

In a single day, DPR Construction has found a way to save more than 3 kilowatts of grid-based energy on certain jobsites as compared with its typical usage.

DPR credits its O-GO, or off-grid office — a mobile office pod designed for sustainability and still under refinement for further production.

Though the first O-GO used by DPR wasn't completed until this summer, the company had for some time been using in San Diego what would come to be one of its basic components: recycled shipping containers.

The project to develop what the company had previously dubbed Eco-Pods stemmed from an idea within the company for an eco-friendly trailer that gained notice from the DPR innovation team. 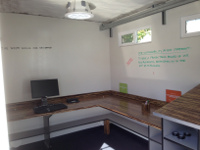 The off-grid office is 20 feet long and can replace the traditional trailers that are used on construction sites. The units also have the ability to charge electric cars. Photo courtesy of DPR Construction

The idea to create the first net-zero office pod gained momentum at DPR, and the company has used its first O-GO at a number of job sites.

“Being green is no longer a novelty,” said Jay Leopold, regional manager of DPR Construction. “The crucial importance of building sustainable structures is now widely recognized. It’s the right decision for the environment, and for businesses, too.”

The O-GO focuses on renewable energy, with its 12-solar-panel rooftop and a connected battery to store the generated energy. Those panels can generate up to 3.5 kilowatts of energy daily.

When electric lighting is required, and the O-GO's operational windows designed to allow for natural light and ventilation aren't enough, a "smart" LED system and Solar Star ventilation system are used.

A diffuser reads the amount of light input into the space.

According to DPR, the LEDs turn on once the light input drops below 10 foot-candles -- a unit of illumination equal to that of one candela at a distance of one foot -- typically reached during an overcast day or in nondaylight hours.

Powered by a dedicated solar panel, the O-GO's ventilation system pulls air through a powered ventilation fan and a set of low-wall vents -- complete with filters, which can be opened with a drawstring.

The O-GO also has the ability to charge electric vehicles.

Gary Scholten, a member of the innovation team at DPR, said the first O-GO was put on display in DPR's San Diego office after its completion this summer.

Sustainability efforts, he said, were first on the list of DPR's reason for creating it.

But it serves another purpose.

"We also wanted a field office that could just be deployed without having to bring in temporary power, especially on projects where that would be difficult," Scholten said. "It's fully off-grid; it doesn't hook up to the grid at all. It's a stand-alone unit."

At 20 feet long, the O-GO unit is large enough to replace a standard 20-foot trailer that would be rolled onto a construction site for mobile-office needs.

But the units could also be developed in 30-foot and 40-foot lengths for larger needs, Scholten said. The unit surpasses DPR's previous efforts in job-site sustainability — which included benefits such as solar power and composting toilets — in that it's the first such effort that's fully off-grid.

On some large projects, DPR still finds a need to use traditional trailers for mobile offices, but Scholten said the company wants to make a shift across the board toward placing the O-GO in wherever it could work.

From just its short time in use by DPR at certain sites, Scholten said, some surprising and good news has emerged.

"We've been checking the battery status regularly, and it hasn't gone below 97 percent — regardless of usage or whether it's cloudy or sunny," Scholten said.

Even when DPR doesn't plan on keeping an O-GO onsite for the entirety of the job — that could easily happen, as the company only has the one prototype for now — DPR sees value in using the unit for sustainable short-term needs, such as in the early stages of a job when permanent power hasn't been established yet.

And even where electrical connections are present on a renovation site, the O-GO, Scholten said, keeps DPR from depending on its client for power.

DPR's corporate marketing department is working to develop an O-GO rollout procedure, with Scholten's help, for each region in which DPR operates around the country.

"We're already designing the future production units," Scholten said. "This unit here, it produces a little bit more, probably, than it needed. So it's a good model for us to know exactly what our needs are, so we can size the system accordingly for future units."

DPR officials said they hope for the next generation of O-GOs to be ready for ordering by the company's other regions around the second quarter of 2015.