After a ribbon-cutting ceremony for the completion of most of Phase 1 of the San Ysidro Land Port of Entry project Monday morning, representatives from the General Services Administration were back to work in the afternoon, speaking to local small businesses about how they can get a piece of the roughly $226 million pie that will be Phase 3 of this same project.

The major upgrades to the port of entry — the busiest land port in the Western Hemisphere, with vehicle and pedestrian traffic expected to increase 87 percent by 2030 — are spaced out over three main phases with microsections in each phase.

Phase 3 was fully funded by Congress in 2014; Phase 2 is still unfunded due to the faster-than-expected completion of Mexico’s El Chaparral entry. Officials hope that it will be included in the 2015 budget.

This means that Phase 3 will be completed before Phase 2.

This next segment is still in the design phase with architect Miller Hull, which Anthony Kleppe, senior asset manager with GSA, said is expected to be completed next fall.

Construction is expected to begin in winter 2016, so Kleppe said subcontracting opportunities should start to pop up in about a year. 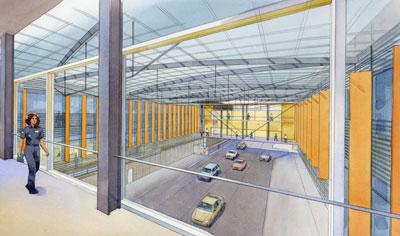 The prime contractor for Phase 3 hasn’t been decided or even put to bid yet, but small businesses will be a key component of the plan, officials said.

Ruth Cox, GSA regional administrator for the Pacific Rim Region, which includes California, said GSA was proud of exceeding its 40 percent goal of subcontracts going to small businesses, having hit the 55 percent mark — until officials there heard that the Mariposa Land Port of Entry in Nogales, Ariz., reached a whopping 79 percent of subcontracts to small businesses.

Now the bar has been raised.

While the specific contracts themselves or the total monetary value of the subcontracting pool hasn’t been decided because the project is still in the design phase, the core components of Phase 3 improvements may provide an idea of the types of services needed.

“Phase 3, the next phase, is the realignment of the I-5 freeway, taking it about 500 meters west to the new Mexican port of entry at El Chaparral,” Kleppe said.

Once a prime contractor has been selected, that firm will be responsible for doing much of the outreach to attract small businesses. Companies hoping to benefit from this project don’t need to apply to be on any schedules with GSA, though they must be registered on the System for Award Management.

“It’s not like tomorrow you’re going to be able to call GSA and get a job on the San Ysidro Port of Entry project,” Kleppe said.

“There is a process that folks need to go through to do business with the federal government, and now’s really a great time, as we’re warming up to this, to start working on your paperwork and certification and getting listed on SAM,” he said.

Although Phase 1 is almost complete, the final section, Phase 1D, is still in the works. The prime contractor is Halbert Construction, which is overseeing the construction of the pedestrian facility off Virginia Avenue on the west side of the port.

This 22,000-square-foot facility will be the first major increase in pedestrian capability since the 1970s.