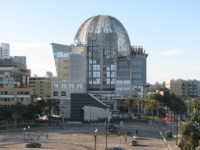 The $185 million San Diego Central Library has been a welcome addition to the city’s skyline since it opened a little over a year ago. The library has been hosting an array of events, even weddings. Staff photo by Carlos Rico

The San Diego Central Library has been open for a little over a year now, and by all accounts has been a huge success via its design, programs and collaborations.

The Central Library has allowed for career-advancement programs, new streams of revenue from booking weddings and has even caught the attention of Comic-Con International: San Diego organizers. All of this would not have been possible within the old dilapidated Central Library on E Street.

“We just didn’t have the room or space, and quite frankly, the demand for some of the new programs and collaborations we have now,” said Marion Moss Hubbard, senior public information officer for the San Diego Public Library.

Hubbard said that at the old library they were averaging 800 people a day, but now there are approximately 3,000 visitors that walk into the new Central Library.

Because of the added attendance, it has allowed for increased collaborations. One is with the San Diego Workforce Partnership and the Bank of America-Merrill Lynch Career Center. It is a one-stop shop for those that need help writing resumes, practice their interviewing skills and discovering the right places to search for a job.

“We average 45 to 50 people per day, and we have had to add staff because of the demand and success of our career center,” Hubbard said. “Because of a new facility people are really take advantage of the services we offer.”

Another booster has been having a 3-D printer. Members of the Central Library can use the 3-D printer for free, and Hubbard said it has brought together students and entrepreneurs, and volunteers from Makers Quarter.

The $185 million Central Library also has a two-floor charter school; two levels of underground parking; an outdoor plaza; and a 350-seat auditorium on the site's south end.

The new library doubles in size of the old one and stands at nine levels totaling 497,652 square feet. Its design allows for all of its publication collections to be out on display for the public to browse.

And because of its new larger facility, the library’s Sullivan Family Baseball Research Center was able to accept a large donation of baseball memorabilia from the William J. Weiss Collection earlier this year.

“Fifteen tons of information was donated, dating back to the 1870s,” Hubbard said. “The National Baseball Hall of Fame (Cooperstown, N.Y.) didn’t have room for Weiss’ collection, so it was donated to us.”

Hubbard added that library staff plans to digitize the memorabilia, so it can also be seen online. The Central Library will now have the second-largest collection of baseball memorabilia, only behind Cooperstown.

The San Diego Public Library recently partnered with Comic-Con organizers and participants. At this year’s convention, the library had a booth to sign up new members and invited Comic-Con aficionados to see the building by hosting panel discussions and games.

“It’s really neat that we are able to do a lot more innovative programming because of the new library,” Hubbard said. “And we get a lot more volunteers just because we have a new facility.”

A bright surprise since the Central Library opened 14 months ago has been the revenue generated via the ability to rent out event space, something that was not available at the old library.

“The event space has been phenomenal, especially for weddings,” Hubbard said. “We have had about 40 weddings already and we are almost booked out through next year. We are starting to make reservations for 2016.”

From a design perspective, Rob Quigley, architect of the Central Library, said that even though it took 17 years to approve and build the new facility, he was amazed that for the most part the original drawing stayed intact.

“All in all, that is quite remarkable,” Quigley said. “The project didn’t get watered down like it could have been with all the turnover over the years at City Hall and the people living and working downtown.”

Quigley said one of the biggest challenges when designing and building the new Central Library was that the project’s budget was approximately 30 percent lower than what an average library would cost to construct on the West Coast.

“It meant some of the finishes that I wanted didn’t get quite done all the way, but we didn’t lose anything,” Quigley said. “It’s a testament to the contractors and engineers and all those that were involved in building the new library.”