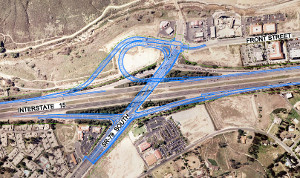 Construction plans for the interchange where Temecula Parkway (state Route 79 South) intersects with Interstate 15 will alleviate traffic in the area.

The city of Temecula is nearing completion of the design and construction plans for the Interstate 15/state Route 79 South Ultimate Interchange project. The project will modify the city’s most southerly interchange where Temecula Parkway (SR-79 South) intersects with I-15, building upon improvements constructed by the county of Riverside some 15 years ago.

The interchange’s current “tight diamond” configuration is a common one for localities looking to improve freeway access in growing areas. It has served well, but it is obvious that today’s traffic volumes are too much for the ramps and undercrossing. This segment of I-15 averages around 150,000 vehicles per day [Ref: State of California. The Transportation Agency, Department of Transportation, Division of Traffic Operations. 2013 Traffic Volumes on the California State Highway System. Sacramento: State of California, 2014. Print.].

With numbers like these, it’s no surprise to see the line of cars back up from this exit and onto the freeway. The line often extends to the Santiago Road overcrossing, and sometimes as far back as the Rancho California Road on-ramp.

Combine this with the interchange’s tightly spaced, somewhat disconnected intersections and the result is the ever-present snarl of gridlocked traffic trapped beneath the freeway.

To address these concerns, the project includes several improvements that will work together in relieving the congestion:

· Remove the existing, southbound on- and off-ramps. Replace the off-ramp with a loop that passes over SR-79 South, then circles back to the signal at Front Street. Construct a parallel on-ramp that also stems from the Front Street intersection.

· Add a lane on SR-79 South beneath the interchange for a total of three-lanes per direction, plus dual-left turn pockets at the new ramp signals.

· Provide additional lanes or turn pockets at the ramp intersections.

The new configuration, represented by blue lines on the aerial exhibit, will provide additional storage for vehicles on the southbound exit and improve exit flow via a free right-hand turn at the signal. Elimination of the middle intersection, along with lane and turn pocket additions, will alleviate gridlocked traffic beneath the freeway. All in all, these modifications are expected to greatly improve traffic flow in the area.

After completion of the construction plans, there will still be much to do before putting the project out to bid. It is anticipated that construction could start as early as late summer to early fall of 2015. Construction is expected to last 1½ to 2 years.