The city of Temecula celebrates 25 years 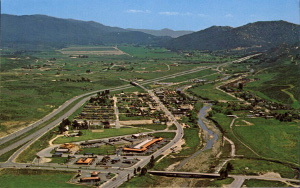 The 25th anniversary celebration for the city of Temecula will be held from 6 to 9 p.m., Dec. 1, at Temecula City Hall at 41000 Main Street in Old Town.

As the city of Temecula prepares to celebrate its silver anniversary on Dec. 1, here is a look at some statistics from 1989 and today. 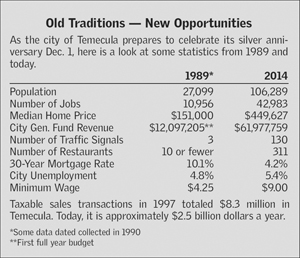 Taxable sales transactions in 1997 totaled 8.3 million in Temecula. Today, it is approximately $2.5 billion dollars a year.

Temecula celebrates its 25th year with an improving economy

The city of Temecula Sales Tax Update for fourth-quarter sales ending December 2013 showed continued positive growth. Temecula’s October through December sales ended 3.4 percent higher than the same quarter one year ago. The building and construction sector contributed to the higher sales tax for the quarter with a solid gain of 34 percent over Q4 in 2012. Autos and transportation sector reported a gain of 7.5 percent from the auto dealerships. Restaurants and hotels reported a gain of 6.8 percent for the quarter. This trend was experienced statewide, indicating an improved economy and increased disposable income.

While Temecula’s population has quadrupled from 27,000 to more than 106,000 residents since 1989, the city retains its simple small-town feel and sense of community.

Development permits are issued for many purposes that widely range from minor to major for different needs such as grading, plumbing, electrical, mechanical, roofing, new housing, patio covers, pools, fire sprinklers, commercial signs, and so much more.

The following counts include all of the types of development permit activities initialized within the city of Temecula since 2006. The overall permits are up 5,731.

Business licenses are at an all-time high. Over the past two decades, the city of Temecula has evolved into an innovative, dynamic city and a regional economic center for Southern California. New businesses are welcome to the community and city officials say they are ready to assist throughout the development process and beyond. Active business licenses continue to climb with 42,983 jobs in the city.

Established in 2004, Visit Temecula Valley (formerly the Temecula Valley Convention & Visitors Bureau), the Temecula Valley region’s official tourism marketing organization and resource for visitors, announced that a record all-time high of $651.4 million in travel spending in 2013 (up $215.3 million from 2004) was generated into the local Temecula Valley Southern California economy by nonresident, overnight travelers and visitors traveling more than 50 miles one-way from their homes.

Although Temecula’s population has nearly quadrupled since 1989, from 27,000 to more than 106,000 residents today, a popular attraction of Temecula is its simple small-town feel and community involvement, including many special events that bring the community together. The events planned to celebrate Temecula’s 25th anniversary include a community picnic, bike ride, scavenger hunt, meet and greets, and more.