Who's Who in Real Estate 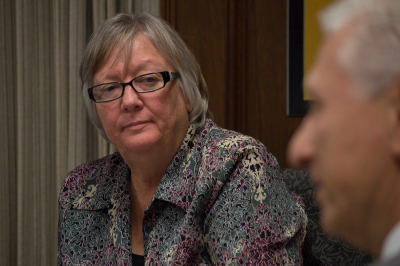 The world of property management has changed, and not just because it is more difficult to evict a tenant.

The status of property management in San Diego County was the topic of a recent roundtable discussion at The Daily Transcript office.

Ted Kimball, a partner with the law firm of Kimball, Tirey & St. John LLP, said that when he started his practice in 1977, landlords were generally handling their own evictions.

Kimball, who represents only landlords, said back in the 1970s it was possible to evict a tenant in as little as 14 days.

"Today, if it is uncontested, it is 40 to 50 days, and if it is contested, it is generally 60 to 70 days," Kimball said, adding that the eviction period can be longer depending on the circumstances.

In addition to what's required at the state level, Kimball, who has 66 attorneys working for him, said there is a city ordinance requiring landlords to show "just cause" before they can evict a tenant who has been there for more than two years.

Raising rents is another issue. Terry Moore, a principal with ACI Investments, related the story of a 100-year-old property in Golden Hill acquired for $130,000 per unit within the past couple of years. The owner then invested $40,000 per unit on upgrades.

"He then doubled the rent," Moore said.

Kimball said while such improvements may justify a significant increase in rents in the landlord's mind, that doesn't necessarily mean the hikes will be allowed to happen.

"You could have problems if they aren't done right," Kimball said adding that a 60-day notice is required if the rent increase is 10 percent or more.

Another big issue for property managers -- whether their real estate is multifamily, commercial, industrial or retail -- is compliance with the Americans with Disabilities Act.

Kimball said entire law firms are dedicated to the ADA as it pertains to multifamily. A problem with these lawsuits is they can easily eat up any profit with attorney's fees, he said, citing the case involving a ramp at a Lawrence Welk Village timeshare "that was half a degree off the correct specifications."

Not all of the changes affect apartment landlords.

Steve Center, Cushman & Wakefield senior managing director, said that new Title 24 regulations mean that if more than 10 percent of lighting or HVAC system in a given commercial space is being upgraded, it triggers the requirement to replace the area's entire system.

"Making these modifications will cost an additional $5 to $7 per square foot," Center said. "And we're also seeing inflation in construction costs."

With the higher land and construction costs, Center said, rehabilitating existing properties is still more important than ever.

"This is the new development," Center said. "You buy older properties such as what's happening in Sorrento Mesa where the older space is becoming the new creative office."

These aren't the only changes in the property management arena. There has also been an expansion in the types of properties being managed.

Lane Elliott, California Republic Bank senior vice president, said his firm has clients who were flipping as many as 1,000 homes per year or overseeing 300 to 400 homes.

"We have a client in the Bay Area who is managing homes in three counties," Elliott said.

Elliott said his bank is highly selective about with whom it will work.

"We have been able to cherry pick. … We have $1 billion in total deposits and only 500 clients," Elliott said.

While managing single-family portfolios is becoming a norm, if all the multiple bids are any indication, multifamily remains the favored asset class.

Moore said he has had as many as 20 bids on good multifamily properties in recent weeks.

Moore added that foreclosures didn't affect the multifamily market as much as the single-family arena.

Finally, the roundtable participants addressed how technology continues to affect property management, whether it is to keep up on rents, energy consumption or other factors.

"Even the timetable for collection of rents is automatically posted on an accounting system," Elliott said.

Joe Altman, Evanco Realty Advisors property manager – who is part of the younger workforce that has grown accustomed to living with new technology -- said smartphones have enabled him to monitor properties electronically and order a given item within the hour without having to return to the office.