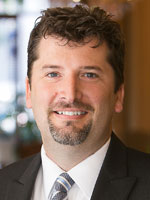 Before attending law school, Craig Wendland worked as a biochemist in San Diego's flourishing biotechnology community. He graduated with honors from University of California, Berkeley, with a degree in molecular and cell biology, and then worked for pharmaceutical powerhouses Pharmingen, Inc. and Becton Dickinson.

After almost ten years in the biotechnology industry, Mr. Wendland applied his strong background in science, mathematics and logic towards a career in law. As an attorney, Wendland synergized his technological acumen with his love for debate to make compelling arguments on behalf of his clients as a senior associate for The Frost Firm, a boutique law firm in downtown San Diego.

Having graduated with honors from the University of California Berkeley with a B.A. in molecular and cell biology, emphasizing in genetics, it was only logical that Wendland would see San Diego's flourishing biotech community as the perfect launchpad for his career.

"I loved working in the sciences…. And I worked on the bench for a number of years, doing that almost a decade," Wendland said. Wendland excelled at his job, quickly rising in position to supervise a team of scientists at a local laboratory. But Wendland found that his position came with a price. "You hit a point where you're not really doing ‘science' anymore. I was supervising a lab and I ended up managing people. Managing people and science are two totally different animals, and that's where I had a change in my pathway."

Rather than continue in a formal management capacity, which would have necessitated Wendland returning to school and obtaining an advanced business degree, Wendland formulated a plan in which he could encompass both his love for the sciences and his love for rhetoric.

"Even before college, I was interested in debate and rhetoric," Wendland said. "I thought to myself, ‘If it's necessary for me to go back and get a master's degree or even a Ph.D. and I will still be running a laboratory… I'd much rather go back to school and do something that I truly enjoy."

So Wendland made an enormous transition, uprooting himself and returning to the Bay Area to attend University of California, Hastings College of the Law in San Francisco. "I decided that I wanted to go back [to law school] because I wanted to continue my education and I thought that [law] would be something that I would enjoy doing for a lifespan," Wendland said.

Wendland's choice proved to be opportune. He excelled in his education, obtaining a number of CALI Excellence and Witkin Awards for his academic studies, and after earning his law degree in 2007 Wendland quickly found that his combined expertise in science and law was a valuable commodity. He returned to San Diego to accept an internship at Sheppard Mullin Richter & Hampton, ultimately working in the firm's Del Mar and downtown San Diego offices.

Originally, Wendland intended to work in transactional law, rather than litigation. "They were looking for somebody in biotechnology, primarily for business and transactional work… At the same time, they were founding a new IP [intellectual property] litigation [unit], so I did patent litigation in the Del Mar office. That's how I got a bit of a taste for litigation, really," Wendland said.

It was a taste that helped shape Wendland's career as an attorney. "Litigation is both exciting and stressful. I thrive on [the] competition. [It's] something I enjoy," Wendland said. "The feeling that you're in an intellectual argument and able to have an objective third party make a ruling on it, is something that I find very satisfying." Wendland worked with Sheppard Mullin before entering private practice and ultimately joining The Frost Firm in 2013, the year it was founded.

"My interest and background is in complex litigations, and the firm has had a number of spectacular financial lawsuits," Wendland said. "I'm finding that my own practice is transitioning from intellectual property litigation toward financial transactions and securities litigation, as I gain more experience in the field." Wendland now finds that his practical background in complex sciences and management is a tremendous benefit in each of his chosen practice areas.

Dedicated to community service, Wendland received the Wiley M. Manuel Award for Pro Bono Legal Services in 2010, 2011 and 2012. He was also recognized by the San Diego Volunteer Lawyer Program and honored with the Distinguished Service Award in 2011 and 2012. Wendland serves as The Frost Firm's pro bono coordinator and chair. Wendland is a champion for equal rights and the eradication of domestic violence, in service to which he has completed hundreds of hours of volunteer attorney service over the years.

From Wendland's perspective, his transition from the sciences to law, was the right move at the right time. On that point, you'd get no argument from Craig Wendland.