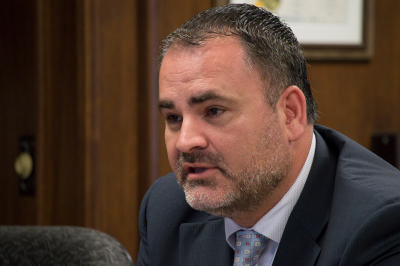 North County's industrial vacancy rate may go below 5 percent this year, Otay Mesa is rebounding and it still makes more sense to buy rather than to build.

These were a few of the conclusions drawn during a roundtable discussion at The Daily Transcript offices Jan. 13.

"It's not just a landlord's market," Walseth said, adding that landlords are able to pick and choose their tenants in a way they haven't been able to do for several years.

At the other end of the county is Otay Mesa, where there is still plus or minus 2 million square feet of vacant industrial space.

"It is the only place with a sizable amount of fully entitled land," Walseth said. "You can't find 50,000 square feet (of industrial space) in central San Diego."

Tom Van Betten, a managing director for DTZ (the firm that acquired Cassidy Turley in recent weeks), said he would like to find 50,000 square feet of industrial space in central San Diego.

Walseth said the fact that maquiladoras continue to add jobs in and around Tijuana bodes well for Otay Mesa, which will see space fill up as support services are needed.

"Toyota has added 300 jobs, and Zodiac (Aerospace) expanded to 300,000 square feet in Tijuana," Walseth said. "Good things are happening across the border."

Walseth added that not only are things becoming more expensive to produce in China, the Asian country has a huge geographical disadvantage.

"It takes China 23 days to ship something here. From Tijuana it can take three hours or less to get here," Walseth said.

Bohlken said of 176 million square feet of industrial space in the county, the vacancy stood at about 6.8 percent at the end of the year.

Walseth said the explosion of the craft brewery industry in San Diego will help fill a lot of those remaining industrial spaces.

With investors who might have unsuccessfully tried to purchase multifamily needing other outlets, Ben Tashakorian, a Marcus & Millichap first vice president of investments, said well-located office and industrial buildings are also in high demand.

Tashakorian said he has seen cases where 50,000-square-foot industrial buildings have sold for as much as $100 per square foot.

"I never thought we would see something like that," Tashakorian said, adding that he has seen capitalization rates as low as 6 percent on industrial buildings -- levels that used to be reserved for apartments.

With office and industrial buildings in higher demand than they have been in years, Vince Provenzano, a Pacific Coast Commercial president of brokerage, said he is seeing commercial/industrial lease rates that are 5 to 10 percent higher than they were at the beginning of last year, and expects a similar rise in 2015.

Northbrook, who also said that he expects a stronger year this year, said there is a surprisingly small number of speculative developments given the strong fundamentals.

Three of those speculative developments are The Irvine Co.’s 306,000-square-foot One La Jolla Center in the University Town Center area; Cruzan's (formerly CruzanMonroe) 175,000-square-foot The Make project on the site of the old Carlsbad Floral International Trade Center on Avenida Encinas in Carlsbad; and The Heights, a 74,895-square-foot Class A office building by Kilroy Realty (NYSE: KRC) along El Camino Real in Del Mar Heights.

"It still makes a lot more sense to purchase an existing property than to build anew," Provenzano said.

Tashakorian said just because the buildings will be new doesn't necessarily mean companies will be willing to pay the mid-to-high $4 rents.

"They could take a floor, but why would they put their eggs in one basket? Tashakorian said.

Although Tashakorian says the markets are improving, that isn't to say he doesn't have concerns.

"This is becoming a very large issue," Northbrook added.

Tashakorian said that water runoff filtration costs are also something that can't be ignored.

"There was a case where a project had to be reduced from 16 to 12 units because of the filtration requirements," Tashakorian said.

Regardless of what will be required for new developments, Michael Singleton, a KTU+A design firm principal, said "smart growth, infill projects are what millennials are wanting."

But not everyone has the same opinion.

"We're looking at mixed-use for the whole Morena area," said Singleton, adding that "there has been a lot of pushback against infill projects."