The five-story AT&T Data Center, a 499,402-square-foot facility at 7337 Trade St. in the Miramar submarket of San Diego, was constructed in 1983 on a 16.86-acre lot. The transaction also involved a 10-year leaseback to the seller, subject to renewal options of five years each. The first year's rent is $9.94 million and escalates at approximately 3 percent, annually. 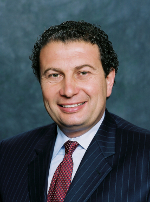 “We had a lot of interest,” Alsadek said. “(Carter/Validus) focus(es) on buying data centers because there's a pretty good infrastructure in these buildings and these guys understand it, understand the tenants and understand the improvements. This was their third acquisition of an AT&T Data Center in 2013. So it made them being selected as a buyer easy because they've already done other transactions with AT&T and made this easier. Both the Carter/Validus team and the AT&T team and legal departments both knew each other pretty well and we able to get a deal done, timely.”