About eight months from now, the city plans to unveil a new downtown attraction with the Horton Plaza redevelopment. New, of course, can mean different things. In this case, it's more like taking a constantly remodeled vintage car, returning it to what it was at its beginning, and parking it in a nicer garage with all the bells and whistles.

Construction at the site between the historical Horton Plaza downtown, across Broadway from The U.S. Grant hotel, and the Balboa Theatre in the Horton Plaza Westfield complex has been increasing steadily since fall. That's when the construction phase at the Horton Plaza expansion began, about a year and a half after demolition of existing structures on the site's south end were completed.

When that demolition work began in November 2012, former San Diego Mayor and California Gov. Pete Wilson said the project would help fulfill the prophecy of Alonzo Horton — creator of the original plaza in the late 19th century — that the space would one day be a place for concerts and public gatherings. 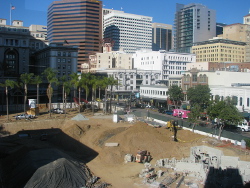 A green fence on Fourth Avenue makes it hard to see the work happening at Horton Plaza, but the top floor of nearby Westfield Horton Plaza mall provides a peek into the construction site. Staff photo by James Palen

Budget issues and delays aside, the city expects the prophecy to come true this fall.

The original plaza, which has changed in appearance time and again and most recently looked like a garden of green shrubs, is on its way to being restored as Horton designed it. The shrubs are gone, and although the queen palm trees that have formed the site's perimeter since its early days have only dirt between them, the coming months will bring grass back to the plaza lawn, and a replication of the historical paver pattern that divided the street block-length space into quadrants.

In what will be the northwest pavilion of the expanded plaza, open trenches reveal what's set to be the brains of the plaza operations — a 35,000-pound vault housing electrical connections to power lighting, sound systems for concerts in the amphitheater and two fountains, including the restored Irving Gill-designed fountain that has been an iconic part at the center of the historic Horton Plaza since its construction began in 1909. 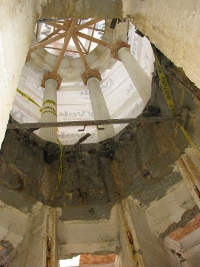 With its foundation dug up and cleared of its original water pumping system, the Irving Gill-designed fountain — opened to the public in 1910 — at the historic Horton Plaza can be seen from within, as its pump system is updated to work with other electrical features to come at the expanded plaza and new amphitheatre. Staff photo by James Palen

The dome of the iconic fountain was shipped to an expert in historical restoration in Pomona. Propst, who with Echo Pacific has mostly been involved in school construction, said excavating around the fountain was unnerving at times — he couldn't help but notice the changes in construction practices during the last century, and the lack of reinforcing rebar in the fountain's foundation — but that the challenge has been worth the care needed.

"The city's really excited about the park — it's just been sitting in limbo for two years now," Propst added. "In meeting a lot of the business owners around here, they're tired of looking at this green fence. They're ready to see something spectacular and that's what they're going to get."

A gutted foundation of the Gill fountain, visible only because of the ongoing work, shows just how much change is needed beneath the surface to marry the old with the new as the plaza's expansion progresses farther south into the block bounded by Broadway to the north and Fourth Avenue to the east.

The vault beneath the fountain, which used to house its original pumping system, is home now only to some rubble scattered between its walls and an inside view of the fountain few will see, from the fountain's heart up to its dome.

Once the fountain is connected to the new pumping system in the new vault several yards away, the foundation will again be covered.

While sunlight will no longer shine on the concrete walls there to reveal the fountain's historical operations, the closing of the foundation will usher in a new phase of construction on that end of the plaza that will revive the plaza's look as it would have been known by visitors there 100 years ago.

Another fountain, which up until July wasn't guaranteed inclusion in the project, will be a new addition in the plaza extension. Providing an interactive water feature, it will offer an option for escaping the summer heat.

For a couple of years following the initial approval of limited tax increment funding for the project — part of the wind-down of redevelopment agencies — Civic San Diego repeatedly said it hoped for the new fountain to be included in the final project.

Despite not being sure funding would be there through remaining tax-increment allowances, the downtown development partner to the city kept the fountain in the discussion as it hoped to find a way to pay for it.

Ideas for covering a projected funding shortfall of more than $1 million included seeking donors in businesses surrounding the plaza, who might benefit from the expanded plaza's use.

The higher-than-expected construction bids flowing in to Civic San Diego last May didn't make the chances for the new fountain's inclusion look any better.

"We're significantly farther down the road than when the estimate was done," Kay said.

Estimates provided years ago on the construction costs were no longer accurate in the new bidding environment, which produced the $14.5 million bid from Echo Pacific Construction that was eventually accepted.

It turned out any ideas for private fundraising were unnecessary. When Civic San Diego appealed to the California Department of Finance for additional funding to cover the increased construction costs, it decided to request funds to cover the fountain as well.

"When we received the hard bids, and we wanted to go to the state, we decided that the interactive fountain was an integral part of this project — and it was part of the original design intent," Kay said. "So we included that add-alternate with our budget request to the state, and ultimately, it got approved."

Propst said December's heavy rains made that month a loss for his crews.

The multiple underground pavilions on site — some of which will serve as storage, utilities and janitorial spaces while others will be publicly accessible, such as the bathrooms planned for the plaza's south end — turned to deep pools of water as they caught and held rain runoff, and dried slowly with the limited wind and sunlight that comes with a site surrounded by tall buildings.

“A site this small — we got 5 inches (of rain) over the course of two weeks here," Propst said. "You could wakeboard to my trailer."

Catching up on the lost work time has been a priority since, and Propst said a hard push has ultimately not threatened a significant delay.

Within three months, he added, the underground pavilion sites will be topped out to allow for grading in the amphitheater site. The pouring of foundational piles for the tall luminarias that will light the amphitheatre will follow, and by about August, the subslab for the amphitheatre pavers will start to be placed.

The site, Propst said, will actually start to look like an amphitheatre by then, with completed terrace seating construction and a start to the stone paver installation.

Civic San Diego is targeting Oct. 15 as the redeveloped plaza's grand opening. It was Oct. 15, 1910, the day on which The US Grant opened its doors, that the historic Gill fountain across the street from the hotel was unveiled to the public.