When Dan Malcolm, chairman of the Port of San Diego’s board of commissioners, opened a hearing on whether to build a gigantic Ferris wheel along the waterfront, he told his fellow commissioners that they were about to have “a little bit of fun.”

Instead, what they got was more than two hours of public testimony and debate, including threats of possible lawsuits and warnings about how a wheel potentially standing 100 feet taller than the Statue of Liberty might affect aviation, traffic congestion, parking, scenic panoramas and existing local businesses, ranging from the popular Fish Market Restaurant to the shops at Seaport Village.

It wasn’t that the opponents -- who were countered by supporters from business groups such as the San Diego Regional Chamber of Commerce -- were against the general idea of having a Ferris wheel or sky tower on the edge of the bay.

Their main concern was that the port seemed to be ignoring its own long-standing commitment for creating a long-range, integrated plan for developing all of the property under its control: 5,480 acres along 31 miles of shoreline. 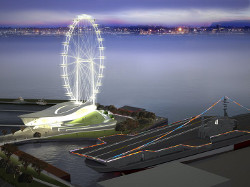 A rendering from Discovery Point LLC shows one of the plans proposed to the Port of San Diego for adding a Ferris wheel to the waterfront. Courtesy image

Although the commissioners eventually came up with a compromise, the controversy is an example of what can happen when developers and their supporters in municipal agencies try to get a jump on the planning process.

Over the past two years, the port has been trying to craft a master plan to set an overriding vision for its property holdings, which stretch from Point Loma to Chula Vista. The goal was that instead of issuing ad hoc decisions on individual real estate developments along the waterfront, the port would be able to evaluate how each development would fit into the overall plan, including how it would affect the surrounding neighborhood.

That doesn’t mean -- as some supporters of the Ferris wheel have contended -- that the approval process has ground to a halt. The port has green-lighted a number of developments while the planning process continues, ranging from hotels and restaurants to an open-air fish market.

But critics say the Ferris wheel proposals are so huge that they should be decided only within the context of an integrated planning process.

Sky Views America Inc.'s plan that was presented to the Port of San Diego. Courtesy image

The six proposals that came before the port board on Feb. 10 -- five Ferris wheels and a gondola-bearing sky tower -- ranged in size from 175 to 450 feet tall. In comparison, the Statue of Liberty stands 305-feet tall from the ground to the tip of the torch, or 151 feet from the top of its pedestal to the torch. In addition, some of the wheel proposals include developments at the ground level, ranging from exhibition halls to retail shops and restaurants.

Critics say such a structure would not only leave a permanent mark on the city’s skyline but would also create the need for new parking and traffic lanes to accommodate the expected flow of tourists, as well as affecting surrounding businesses and residences.

One proposal, for instance, would put a 450-foot-tall Ferris wheel and large exposition hall on Discovery Point, a spit of land now occupied by the Fish Market restaurant, directly across from the USS Midway Museum. Jim Wendler, who owns the restaurant, said that such a project would put him out of business.

A competing proposal to erect a 400-foot-tall Ferris wheel near Seaport Village has already been opposed by business owners there, prompting the developer to approach the port board instead. “Seaport Village is the only appropriate site for a wheel of the size we're proposing," said Kip Howard, founder of Allegis Development Inc., who added that so far he has been “unsuccessful at convincing” the village's operators to add his wheel into their long-term plans.

Port Commissioner Bob Nelson said that while he’s not opposed to the general concept of a Ferris wheel, he opposed “taking a detour” from the integrated planning process, which could do a better job of figuring how such a major project would affect existing attractions such as the USS Midway Museum or businesses at Seaport Village.

The problem with a project as major as a giant Ferris wheel, he said, is that “if one thing goes wrong, a whole bunch of other things can go wrong,” having a domino effect along the waterfront.

Cory Briggs, an attorney with a long track record of suing municipal bodies for alleged violations of state or local regulations, warned that the port might not only be breaking its own rules on long-range planning, but also state regulations that have mandated ports to establish and follow integrated plans.

“Go ahead and do it. That will make more money for me,” Briggs said.

“You’ve made a commitment to do no more piecemeal developments but instead to do things within an integrated plan. If you go forward to treat this as something special … it would be a finger in the eye of the integrated planning process,” he said.

Several port commissioners, as well as speakers from business groups such as the Downtown Partnership and the Port Tenants Association, worry that it could take several years for the port to craft its plan, which might be too long for the developers to wait.

“Time kills all deals,” said Robert “Dukie” Valderrama, port commissioner representing National City. “If we wait until the end of the integrated planning process, we’re not going to get anything done.”

But Nelson responded that even though time may kill some deals, “it certainly hasn’t killed the Ferris wheel, which has been around for more than a century. If Ferris wheels haven’t disappeared since the 19th century, they certainly won’t be killed by what we’re doing here in the 21st century.”

Some speakers noted that the Ferris wheel operators approached the port on their own rather than being approached by the port, suggesting that they were attracted by potential profits that would still be around by the time the general plan was completed.

In the end, the commission voted for a compromise. Instead of waiting for the entire general plan to be completed before approving major developments, the board intends to develop a fast track for integrated plans for specific areas along the waterfront that have attracted the most attention from developers.

“It’s certainly exciting to be wooed by such exciting proposals,” said Betsy Morris, president of the urban planning organization Citizens Coordinate for Century 3. “But it’s also important to reinforce the integrity of the master plan process with a creative, inclusive process that includes a holistic approach to development. Routine permitting will continue, but it’s important to establish guidelines for such major proposals as this.”

A closer look at the development proposals

A half-dozen developers appeared before the San Diego Port District's board of commissioners this month to air competing proposals for amusement rides along the waterfront.

• Discovery Point LLC proposes a 450-foot-tall Ferris wheel and exposition hall on the spit of land across from the USS Midway Musem that now houses the Fish Market Restaurant. The wheel would charge riders $25 to $30 each and generate $3 million in annual lease revenues for the port and an estimated $60 million to $70 million in revenue for the owners, a limited partnership that includes SeaWorld Parks and Entertainment Inc. (NYSE: SEAS)

• Allegis Development Inc. proposes a 400-foot-tall wheel in Seaport Village to be built by the same team currently building the similarly sized Orlando Eye wheel near Florida's Disney World. Allegis founder Kip Howard said Seaport Village "is the only appropriate site for a wheel of the size we're proposing," but adds that so far he has been unsuccessful at persuading the village's operators to let him build there.

• U.S. Thrill Rides proposes a 250-foot-tall observation tower topped by a 20,000-foot circular restaurant and observation deck, with enclosed gondolas ascending and descending on a pair of winding tracks, for $15 per ticket. U.S. Thrill Rides has created attractions for Balboa Park, Universal Studios, Six Flags and Mall of America.

• Pier 57 Miner's Landing, which operates a wheel and retail and restaurant complex on Seattle's waterfront, proposes a wheel of 175 to 250 feet, with adult tickets costing $13 to $17, as well as an array of shops and eateries.

• Sky Views America Inc., a joint venture that includes operators of the 112-foot wheel at the San Diego County Fair, as well as wheels at Niagara Falls, the Potomac River and other locations, proposes a 175-foot wheel, preferably at the western end of the Broadway Pier, that would charge adults $15.