The Port of San Diego sent out a request last summer for qualifications on its plan with the city of Chula Vista to build a hotel and convention center along Chula Vista's bay front, a major component of the city's Bayfront Master Plan.

A "whopping" response was received, "but it turned out to be a good one," Chula Vista City Manager Gary Halbert said recently.

The single qualifying developer, Houston-based RIDA Development Corp., is already building a 1,000-room hotel next to the Houston Convention Center, and the company is also slated to develop the future Gaylord Entertainment hotel in Aurora, Colo.

If the Gaylord name sounds familiar, it should. In 2008 Gaylord dropped its plans for a 32-acre resort in Chula Vista, one of several proposals that fell apart as the city tried to develop its bay front. 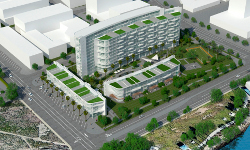 The Chula Vista Bayfront Master Plan, approved by the state Coastal Commission in 2012, contains four major phases and an about 24 years worth of work.

It covers 535 acres of waterfront property from Sweetwater Marsh by the Living Coast Discovery Center south to the South Bay salt ponds.

While Halbert is not with the Port of San Diego, he has spent years working the ins and outs of the Chula Vista Bayfront Master Plan with Port officials, previously as Chula Vista's director of development services, then as the assistant city manager and now as the city manager.

He said all indications are that RIDA is the right company to build the hotel and convention center, along with other possible developments.

"We've had a chance now — we've had face-to-face meetings," Halbert said of RIDA. They've come out here; we've gone out to Houston. We met with the public side to chat about what's been their experience working with RIDA. Very good people."

In mid-February, the Port announced the commissioners' authorization of an exclusive negotiating agreement with RIDA for the development, an agreement that had been in the works since RIDA's successful response to the call for qualified developers.

Port Chair Dan Malcolm said that moving into an exclusive agreement with RIDA opened the door to creating more access to the waterfront and potentially thousands of jobs.

The conference center is expected to have up to 1,600 hotel rooms and 400,000 square feet of convention center space. But the request for qualifications invited respondents also to look at property surrounding the conference center site, so the final development could encompass more.

"My expectation would be that they probably will [propose development on other parcels]," Halbert said. "We'll find out through the exclusive negotiating agreement — they haven't proposed anything yet."

Halbert sees 2015 as the negotiating period between the Port and RIDA. He estimated that design and project drawings could be done through 2016 and potentially carry planners into 2017 before construction starts.

The first milestone in moving toward the conference center's development came last October, when the Port and city of Chula Vista opened a new extension of H Street, connecting the more-inland Bay Boulevard to Marina Parkway.

H Street had previously ended at Bay Boulevard. The 2,000-foot extension toward San Diego Bay will serve as the primary access route to the heart of the bay front plan.

Farther south along the bay front, Pacifica Cos. is advancing in its plan for residential towers, which at full build-out could include 1,500 residential condominiums.

In late 2012, the California Coastal Commission gave its approval to the Pacifica plan. Most recently, the developer has been preparing for the city of Chula Vista's design review process for perfecting its Phase 1 developments.

The land swap approved in 2010 between Pacifica — which owns property along the bay but found it to be too environmentally sensitive for its plans — and the Port of San Diego for the 35 acres is in progress.

Allison Rolfe, a representative of Pacifica, said the transaction is taking time to complete because the project site, formerly owned by Goodrich Aerostructures, was an industrial site and required remediation.

"In order for us to feel comfortable taking that land, we need to get some immunity through the regulatory agencies so that — we're not the ones who contaminated the site — so that we will not be held liable."

Goodrich and the Port have been cleaning up the site, and the San Diego Regional Water Quality Control Board's required public comment period on the recently submitted environmental documentation of the cleanup recently began.

Without approval of the environmental documents from the water board — which would allow the site to be closed — Pacifica can't close escrow on it for its land swap. Rolfe said Pacifica expects the site to close by March.

Sergio Sandoval, a senior project manager at Pacifica who is managing the proposal's design process, said plans still call for up to a 250-room hotel, and 420,000 square feet of commercial office and retail space to accompany the residential units.

Build-out, however, wouldn't be completed for 20 years.

What gets built after the first Phase 1 residential tower, and when, will depend on market demand.

Still early in Phase 1, Pacifica expects this fall to begin realigning a portion of Marina Parkway west of its connection with J Street. Rolfe said the curved potion of Marina Parkway — which turns Marina Parkway from an east-west route along the north side of Marina View Park into a north-south route east of the Chula Vista Yacht Club — needs to be squared off to accommodate Pacifica's early plans.

Sandoval said he hopes construction of the Phase 1 residential tower, including 160 of the proposed condos in a five-story tower, to begin by fall 2016, with a completion target of fall 2018. The first escrow closings on residential condos in the tower are hoped to come by early 2019.

"The difficult approvals were received a while ago," Rolfe said. "Aside from this design-review approval, which is pretty minor in the grand scheme of things, the project is approved. We're basically just going through the process of developing our designs and pulling permits."

Floor plans for the units in the first residential tower are still under development, but Pacifica said there will be a mix of single-story and two-story townhomes.

An integral part of the overall Bayfront Master Plan development, the relocation of the South Bay Substation south of L Street along Bay Boulevard, is also moving forward.

Progress within the Chula Vista Bayfront Master Plan largely depends on the substation's relocation, as a future park is planned for the site of the existing substation. Additionally, SDG&E has said, the new substation and its new equipment will allow SDG&E to meet the projected growth in energy demand

As recently as November, SDG&E was granted its notice to proceed from the California Public Utilities Commission on preconstruction work.

The utility had been awaiting the go-ahead last year after the California Coastal Commission granted the project a permit under the condition that more undergrounding be completed than had previously been approved by the CPUC.

The notice to proceed doesn't allow for grading or vertical construction to begin, but it did allow for SDG&E to start preparing the site, such as "potholing" — searching for underground utilities — and weed abatement.

Representative Jennifer Ramp said SDG&E may start grading, which could take five to six months, at the site by the end of February. Above-grade work that includes erecting structures will follow the grading.

The project could be energized in just more than a year, while the cut-over of transmission circuits from the South Bay substation to the new Bay Boulevard substation is expected to be complete by the end of 2016.