San Diego County's reputation as one of the nation's top beer-making centers should be burnished in the next couple of months, as the region opens its 100th brewpub, with dozens more potentially in the pipeline.

Already, there are 98 brewpubs operating within the county, according to West Coaster, the online magazine of the local brewing industry. The magazine reports that 44 more are in the planning phase -- and although many of those seem like they may never get off the drawing board, others are already under construction. 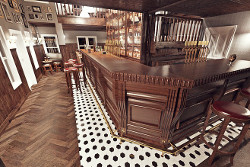 Half Door Brewing Co. opened recently in the East Village, just a block away from Petco Park. There are nearly 100 breweries in the county today. Courtesy image

Given that 14 brewpubs opened last year, at a pace of higher than one a month, it seems likely that the century mark will be hit soon. In the meantime, a number of existing breweries are in the midst of remodeling and expansion plans that should keep their architects, builders and designers busy.

Some of the current projects include:

+ South Park Brewing Co. Scott Blair, owner of Hamilton's Tavern at 30th Street in San Diego's South Park neighborhood, has acquired a 4,500-square-foot former bicycle shop adjoining the tavern, where he has built a pub and brewery, slated for a soft opening by the end of this month.

+ Belching Beaver Brewery. Last September, Belching Beaver, which already has a brewery in Vista and tasting room in North Park, paid $1.35 million for a 6,740-square-foot former bank building at 302 E. Broadway, Vista, with hopes of reopening it as a brewpub, simply titled The Beave, sometime early this year. When he closed on the deal, owner Tom Vogel said he hoped to incorporate some aspects of the bank into the restaurant. For instance, he said he might use the vault to store an exclusive array of spirits. “You will be able to go into the climate-controlled vault and pick out your specialty bottle, and staff will bring it to your table,” he said.

+ Green Flash Brewery. Last summer, Green Flash inked a 10-year, $1.28 million lease for a 12,275-square-foot industrial building in a business park at 12260 Crosthwaite Circle, Poway. The new facility, slated to open sometime early this year, is meant to help the brewery expand its production capacity, since its headquarters at Sorrento Mesa has been struggling to keep up with demand. But it will also feature a small tasting room and tours.

+ The Local Eatery & Drinking Hole. Last November, The Local temporarily closed its location at Fourth Ave. and C Street in downtown San Diego (a second branch remains open in Pacific Beach) for a revamp and expansion that will include a new 10-barrel brewery and tasting room, slated to open in April. The owner, Mina Desiderio, acquired three adjacent properties to expand the facility to a total of 10,000 square feet and hired an award-winning beermaker to oversee the brewery, tentatively titled The Resident Beer Co.

+ Half Door Brewing. Dan and Stacy Drayne, son and daughter of Irish Pub owner Daniel Drayne, last month opened Half Door Brewing Co. at 903 Island Ave., in San Diego's East Village neighborhood. Although the ground floor is already open, with a 10-barrel brewery and pub, construction is still continuing. An upstairs dining area, with a patio that offers a view of Petco Park, a block away, is slated to open in October or November.

+ Bay City Brewing. With financial backing from as far away as the state of Washington, former Monkey Paw brewer Chris West plans to open a 20-barrel brewery in April, at 3760 Hancock St. in Point Loma, adjacent to Interstate 8.

+ North Park Brewery. Homebrewer Kelsey McNair last month finalized negotiations on a lease for the former site of the Undisputed Gym at Ohio and University in North Park. Construction is expected to begin within the next six to nine months, with the goal of including a full kitchen and 15-barrel brewhouse.

“Every brewery project has its hurdles and challenges,” McNair said. “Whether looking at true industrial space or a commercial neighborhood zone like we have, there will always be infrastructure work to do.”

McNair noted that breweries need three-phase electrical power with amplifiers, a hefty water supply line and sewer connector, thick concrete slabs with sloped floors and access for incoming and outbound deliveries. And before construction begins or gets too far underway, the brewer also has to obtain ABC licensing, as well as permits specific to brewing.

“Having a landlord who understands and can work with your pre-opening timeline is critically important,” he said.

To oversee the construction phase, McNair hired Rob Furey, a vice president at REC Consultants and founder of Groundwurk Inc. in downtown San Diego, with extensive experience in engineering and permitting. For architectural plans, he hired Hauck Architecture, whose previous projects have included Plan 9 Alehouse in Escondido, based in an old movie theater; Benchmark Brewing Co., based in a warehouse in San Diego’s Grantville neighborhood; and the Sublime Tavern in Del Mar, a tony site overlooking the local polo grounds.

Hillary Cocalis, marketing director for Ballast Point Brewing & Spirits, implied that more construction may be on the way even among the more established firms as they struggle to keep up with demand.

"We have the fortunate problem of not being able to make enough beer right now," Cocalis said. “Even in San Diego, where we've been brewing beer for nearly 19 years, our growth continues to outpace our projections.”

Ballast Point’s recent expansion into a much larger production facility in Miramar has given the company space to grow, but only temporarily.

“When we first started building out this brewery, the space felt gigantic," Cocalis said. "Now it's starting to feel small.” The company runs three other brewery locations in San Diego, “but we have basically maxed out capacity at those breweries as well,” she said.

Although the number of breweries is sharply on the rise, McNair said he doesn’t think the market is over-saturated.

“At some point saturation may be an issue, but we're not there yet," he said. "Maybe about two-thirds of the way there,” he said. “Some small markets are obviously already more saturated than others, but we're still seeing growth within those areas, such as Vista and Miramar. I'm a big believer in the concept of ‘a rising tide floats all boats.’”

Vince Vasquez, analyst at the National University System’s Institute for Policy Research, says the growth of the brewing industry is being pushed by the broadening of the consumer base, especially from the Millennial generation, as members get to the age where they are earning more money for discretionary spending.

“Craft beers are ascending at the right time in terms of demographics, because as the Millennials get older, they’ll be making and spending even more money,” Vasquez said. “That means they’ve got more room to run in San Diego.”

Vasquez said one reason that the industry is continuing to grow is that it is so diverse. While San Diego has a number of breweries that are selling their wares across the country, the vast majority of the brewpubs that are opening are small, community-based taverns, with no intention of bottling or distribution, which cushions them against being crushed by competition.

“What that means is the great craft beers are coming to you, the consumer, rather than having you drive to a brewery in an industrial park somewhere,” he said.

McNair says that in the current environment, the biggest threat to a craft brewer is if it fails to keep up its quality standards. “Beer drinkers are more educated than they ever have been, so there is no room for flawed beer in the San Diego beer industry,” he said.