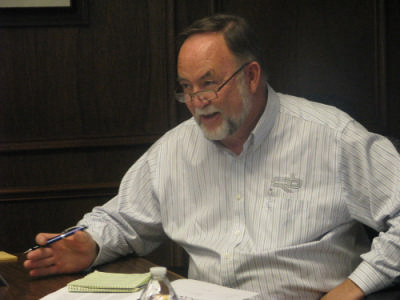 General contractors, for the most part, say they are “cautiously optimistic” about the construction industry in San Diego this year, with smaller projects holding up backlogs and numerous bidders still vying for projects.

“We have been fortunate to have been busy the last few years,” said Chris Hess, vice president of operations for Lusardi Construction. “Work at San Marcos High School filled a big portion of our capacity, and the hospitality and the automotive industries have really kept us going.”

Construction executives discussed their thoughts about what to expect in 2015 at a roundtable discussion Feb. 19 at The Daily Transcript.

Hess said his company is seeing more of the same so far this year, along with office and industrial projects.

“I think there are some opportunities down in Otay Mesa again for big warehouses, so I expect to see some action down there,” Hess said. “We are cautiously optimistic.”

Hickey sees work locally in Type 1 concrete high-rise projects in downtown, industrial office buildings, and smaller-scale work in the form of medical offices and clinics from the $500,000 to $5 million range.

He said that it’s still a competitive market among contractors when bidding on projects.

“Just to give you an example, there was a lab building, about a month or so ago, a request for proposal came out and 19 very qualified contractors showed up to the pre-bid,” Hickey said. “So the competition continues to be fierce in San Diego.”

Jim Roherty, president of Pacific Building Group, said his firm has seen a strong health care construction market for the past nine months and that he is noticing a shift to service-based selection when choosing a construction team.

Roherty also said that private sector entities are moving to smaller locations and taking up less office space than in previous years because cubicle sizes have become smaller.

Chuck Glynn, project manager and business developer at CRB Builders, agreed with Hickey, saying that San Diego is the home of smaller projects.

Glynn said there is a lot of repurposing and renovation work in Sorrento Valley, Torrey Pines and Rancho Bernardo for the life sciences industry and its facilities. The work includes buildings that can withstand the large energy and water requirements that industry demands.

“Developers are turning B and C buildings into Class A office buildings, adding amenities, expanding and making them a much nicer product,” Glynn said. “Not the type of buildings you will see in San Francisco, but it’s good work.”

February’s Architecture Billings Index, which stated that design activity fell in the West for the first time in eight months, was another reason for the panel to be cautious.

“I think all of us see that and say, ‘OK, we are flush right now but is this [decline] going to last a year, two years or six months,’” Hess said.

Backlogs are averaging about six months, according to the executives.

“I’m like Chris [Hess] -- our projects burn off pretty quick, so I’m looking at the next six to eight months being good and I’m optimistic that it’s going to stay pretty good, but guardedly,” Roherty said. “I still don’t feel like in the corporate office we are driving enough jobs in San Diego.”

Hickey said the workload among subcontractors is also mixed.

“When we talk to subcontractors, there is a group that is extremely busy, but then you see others like large electrical contractors that say, ‘We could use some work,’ so it kind of ebbs and flows with these guys, too,” Hickey said.

So what is the missing piece of the puzzle? Why aren’t there more outside companies wanting to open offices in San Diego?

Roherty said cities such as San Francisco are more business-friendly than San Diego.

“They remove the roadblocks to businesses quicker than, in that area, than they do here in San Diego,” Roherty said. “They seem pretty good at, ‘Here are the rules. If you follow the rules, you can get something built.’ In San Diego, I don’t know if we all know the rules.”

Mike Wolfe, project director at Kitchell, said the quest for a new football stadium for the Chargers is a good example. He said there have been discussions for more than 10 years about whether to build a new sports facility but nothing has come close to fruition.

“There is a clear need, but no one can get it built,” Wolfe added.

Hess said another advantage the Bay Area has over San Diego is that there is “a ton of land” ready to be developed, especially in the East Bay.

“A lot of the work we are doing is south of San Jose or in the Pleasanton Valley,” Hess said.

Hess also said another advantage the Bay Area has over San Diego is that its young, skilled workers are paid well.

Mike Tylman, vice president and office executive with Michael Baker International, said his firm is hiring and targeting college interns to incubate them into the company’s culture to try to keep them in San Diego.

“A person with a great resume is being courted in many different directions. It can be challenging,” Tylman said, adding that the local Baker International office plans to hire 10 planners, engineers and construction managers this year.

Nice information. San Marcos High School is a great project too! I drive by it on my way home.