As the design-assist general contractor, McCarthy was retained by Scripps Health to perform preconstruction services for the $456 million Prebys Cardiovascular Institute before breaking ground in May 2011. HOK Architects was the project architect. Jacobs Engineering Group Inc. served as the construction management firm on behalf of Scripps. The health system will begin treating patients at the new facility in early March.

“This is an exciting achievement for us,” said Bruce Rainey, Scripps Health corporate vice president of construction and facilities. “The new Prebys Cardiovascular Institute reflects the most advanced health care design principles together with remarkably high standards of construction. It stands as a model not only for future Scripps facilities, but also for specialized heart care facilities across the country.” 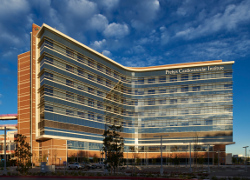 The new Prebys Cardiovascular Institute will be a destination hospital for cardiac care on the West Coast. Photo courtesy of Kutch & Co.

The Prebys Cardiovascular Institute is the cornerstone of a 25-year master plan unveiled in November 2010 that is transforming the Scripps Memorial Hospital La Jolla campus.

The new Prebys Cardiovascular Institute will be a destination hospital for cardiac care on the West Coast. The facility will provide cardiovascular patients with the most advanced treatment options available, while also serving as a center for medical research, clinical trials and graduate medical education.

The first floor encompasses the lobby and shell space for the future build-out of a new emergency department, which McCarthy is performing design-build services on with HOK. The second floor houses operating and pre-op rooms, the third and fourth floors accommodate ICU patient rooms and isolation rooms, and floors five through seven house surgery patient rooms. The lower floor houses sterilization rooms.

“The building design incorporates numerous sustainable design principles and was developed with considerable input from physicians, nurses and clinical staff to ensure efficiencies that will foster exceptional care in a safe, comforting environment,” said McCarthy Project Director Steve Van Dyke. “Close, consistent communication between project team members throughout the course of construction was key to the ultimate success of this project, with the architect, project inspector and McCarthy’s project team all based onsite the entire construction duration.”

Private patient rooms have floor-to-ceiling windows that let in sunlight. The rooms have comfortable, pullout couches for overnight stays by loved ones, as well as flat-screen televisions and wireless Internet access. Warm, soothing earth tones that synchronize with the colors of the sand, surf and sun of La Jolla were used throughout the facility. Large VIP patient suites at the far opposite ends of the fifth, sixth and seventh floors provide ample space for patients’ family members to stay overnight, and are isolated for a high degree of quiet and privacy.

Computerized room-level observation stations, a decentralized medication dispensing process, and decentralized nurse stations will allow caregivers to closely monitor patients and facilitate communication with family members. A long bank of windows floods the south-facing side of the second floor and affords 180-degree views. Floor-to-ceiling windows are featured in the teamwork rooms and staff lounges on the fifth, sixth and seventh floors.

The institute’s namesake is real estate developer Conrad Prebys, a longtime philanthropist who contributed $45 million to Scripps in 2011 for this project.