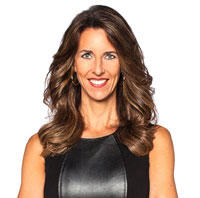 But doing it knowing that a small group is actively working to ensure you don’t succeed — that seems impossible.

Not so for Carey Lohrenz, the Navy’s first female Tomcat pilot, who completed aviation officer candidate school and graduated first in her class from fighter pilot training while a ban on women in combat roles was still in place.

In fact, the ban wasn’t lifted until the very day she was scheduled to select the aircraft she would fly, but Lohrenz refused to relinquish her dream.

Lohrenz, now a mother of four, author and speaker, said her experiences — though extreme — translate to the business world. She recently shared her tips on succeeding at the Farmers Insurance Open’s fourth annual Astellas Executive Women’s Day at the Hilton Torrey Pines.

“When you think about what it takes to get your performance to that level, at the end of the day it's focus,” Lohrenz said. “And going all in, understand what your purpose is.”

She said that taking time to reflect on where you are and mapping out where you want to go is key to identifying your goal.

“If you lose sight of what it is you say is your priority, you will lose the fight,” Lohrenz said, noting that life on an aircraft carrier is about only one thing: successfully launching and recovering aircraft.

Once you have your focus, maintaining no more than three major priorities at a time will let you devote enough energy to keep you on the path to success.

“I say there’s a rule of three — you really can’t have more than three big things,” Lohrenz said. “And that means you need to learn to say ‘no.’ And that’s very hard because ‘no’ feels like a four-letter swear word.”

Fear and failure play major roles in reaching success, whether in the military or private industry. Lohrenz said one of the main points of aviation officer candidate school is to get students to understand what failure feels like.

She said fear of failure is universal and a big reason why people pass up valuable opportunities. Learning to cope with failure and choosing to improve, rather than never trying, is what makes strong leaders and successful people. Lohrenz said she tries to go outside her comfort zone every day to improve herself.

“If you don’t, that means you’ve gotten complacent,” she said. “And as soon as you get too comfortable, what happens? The competition starts coming around, getting up next to you. You think you’re doing good enough, and you are no longer relevant. You will be very quickly replaced. So get comfortable being uncomfortable.”

F-14 pilots typically fly in formations with two to 20 wingmen who serve several purposes: they can point out mistakes fellow pilots are making, provide extra protection and call out one another's blind spots. The same goes for business.

“Follow up and follow through and develop trusting relationships,” she said. “Start working that in, send those emails, communicate with each other and start building that network, that safety support system.”

You can survive solo, Lohrenz said, but a team is needed for major victories. She didn’t always have the support of everyone who should have been on her team as she trained to become a fighter pilot.

She found out her first week of aviation officer candidate school that her drill instructor had never allowed a female who started in his class to graduate, because he believed women didn’t belong in combat roles. This just fueled her drive, and Lohrenz became the first female to graduate from that instructor’s class.

But the barriers didn’t end there. Shortly before graduating at the top of her class from flight school in Corpus Christi, Texas, she was pulled out of a brief by her commanding officer. He told her that because she’d be graduating soon and the military’s combat exclusion clause prohibiting women from entering combat roles hadn’t been lifted, she must either leave the Navy or take a desk job.

“I looked around and realized that the only reason I just had that conversation in the commanding officer’s office is because I dared to show up different,” Lohrenz said.

“I dared to show up as a female. ... I came from the perspective of the jet doesn’t know the difference, so I finished the brief, went back into the commanding officer’s office and just said to him, 'I don’t want to get out of the Navy, I don’t want to go to a non-flying job, so we need to find a third way.'”

And they did, planning to designate her a flight instructor after she got her wings. This was a tough pill for Lohrenz to swallow because her dream was to be in the cockpit of the F-14, not teaching others to fly, but she finished flight school still working toward the goal of the F-14. The day Lohrenz and her class selected their aircraft of choice, the ban was lifted.

“It’s important to remember when [there’s] adversity, when barriers are thrown in front of you, you have to still stay focused on your dreams,” she said. “Stay focused on where it is you want to go because the big golden prize at the end is not always given to the smartest or most gifted — it’s given to the most tenacious.”