By JENNIFER McENTEE, Special to The Daily Transcript
Monday, March 30, 2015

Lorraine Hutchinson, a deputy chief with the San Diego Fire-Rescue Department, has played the odds in work and life and come out ahead.

She is battle-tested but sees her fire-rescue work and her breast cancer fight as part of the same calling in life. 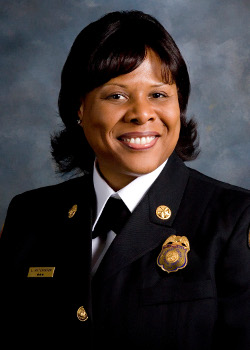 “It’s all an extension of my public service,” she said in a recent interview. “Any time you come face-to-face with something that can kill you, you see things differently. I think that’s what my journey did for me.”

Hutchinson didn’t grow up wanting to be a firefighter. She moved to San Diego from South Carolina in 1982 with plans to become a registered nurse like her aunt. When Hutchinson became pregnant with her daughter, she put her nursing education on hold to work two jobs while going to school to become a medical assistant. As a medical assistant, she worked for various doctors before landing at San Diego State University’s Health Services department, where she met a woman whose husband was a firefighter.

“I knew I liked excitement. A lot of your work as a medical assistant is taking someone’s blood pressure or temperature, but if someone was having a heart attack or had a traumatic injury, that’s where I shined,” Hutchinson said. “It’s funny because I had never seen a woman firefighter before.”

Once it was suggested she pursue firefighting, Hutchinson found mentors along the way who encouraged her to apply with the San Diego department. From a candidate pool of 8,000, she was one of just about 100 prospects -- including only one other African-American woman -- picked to attend the academy.

“Everything fell into place,” she said. “I love my job. I knew I’d like the medical side of it, but it turned out the firefighter part was also an awesome fit for me. It’s been a good marriage and a really good career.”

Over the course of 25 years, Hutchinson moved through the ranks of firefighter, engineer, captain, battalion chief and now deputy chief by taking every promotional exam available to her, she said. Along the way, she also trained as a paramedic and earned a bachelor’s degree in organizational leadership from National University.

Despite the breadth of her medical training, Hutchinson wasn’t particularly concerned in 2012 when her doctor suggested a follow-up appointment after an irregular mammogram. She was just 48 and had no family history of breast cancer. She was busy with work, school and family, so she put off the appointment for several months.

Hutchinson didn’t sense the urgency until a subsequent mammogram and ultrasound necessitated a biopsy. The Stage 1B breast cancer diagnosis came as a complete shock, she said.

“I did a lot of research after I was diagnosed and found out that most women who develop breast cancer don’t have a family history of it. I preach that to everybody now,” she said.

Susan G. Komen San Diego sought Hutchinson as its honorary survivor in 2014 because she represents an underserved population, she said. African-American women are less inclined to get mammograms because of factors including a perceived lesser risk and lower insurance enrollment.

“African-American women get breast cancer less but die at a higher rate,” she said. “The Susan G. Komen Foundation is working to address this disparity and toward removing some of the barriers. They thought I’d be a good face for getting that information out there.”

Beyond speaking to the media and community groups on behalf of the breast cancer foundation, Hutchinson participates in the organization’s fundraising walks. She walked 60 miles in the Susan G. Komen 3-Day just six months after completing chemotherapy.

“It was mind over matter,” she said. “I was still exhausted, but I just put one foot in front of the other.”

Hutchinson’s firefighter family has been supportive of her breast cancer battle since the beginning, she said, and she’s returned the favor by serving as a resource for others in her department who’ve faced the disease within their own families.

“It is a negative experience, but you can make it a positive by helping someone else,” she said, explaining she advocates to friends, family and co-workers to do regular self-exams and schedule annual mammograms. “It’s a survivable disease. If caught early, most people will survive.”

Hutchinson said she also advocates for women and minorities to consider fire and rescue careers.

“Firefighting is a male-dominated profession, but I’ve never had any bad experiences because of the way I carry myself. When I first started in the department, I didn’t socialize unless someone asked me, so I developed a no-nonsense reputation. I was a single parent with a 5-year-old, and this was a job for me. Failure wasn’t an option,” Hutchinson said. “When I mentor women, I say: 'Work harder, be better.' I take it as a positive. I knew I needed to always be studying, always making sure I was on top of my game.”

Hutchinson today is cancer-free and is nearing retirement. If anyone is to glean some inspiration from her experiences, Hutchinson hopes it’s to stay positive and push forward despite obstacles.

“Everyone has challenges in life. It’s how you come across at the end of the challenge that matters,” she said. “Finding out I had breast cancer, I was devastated and knew I could die. But through surgery and chemo, that whole journey, I tackled breast cancer like every other thing I do: I didn’t cry, I did what I needed to get through it. When we’re challenged, it builds character.”