A coalition of 30-some organizations banded together at the start of March to announce the launch of a GoGlobal San Diego campaign aimed at increasing the region’s exports by $6 billion in five years and actively working to attract foreign direct investment -- two areas that a Brookings Institution and JPMorgan Chase report found San Diego performed poorly in.

The buzz around foreign trade, while welcomed, was nothing new for Lynn Hijar, founder of iBiz247, a San Diego-based website that compiles information and resources on exporting and importing to anyone around the world, and who has had a hand in the international trade market for years.

Hijar grew up in Mexico City and moved to San Diego at age 11 with her parents, who opened an export shop here in the states, and said she always loved to travel and was intrigued by different cultures. This led to an internship at the World Trade Center in San Diego where she was able to work on market research projects for companies wanting to expand their footprint in San Diego, or local firms seeking to create or grow a presence internationally. 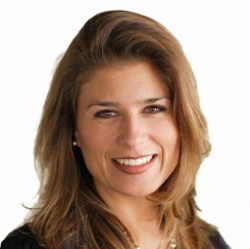 She enjoyed the work so much that she accepted a full-time position at the WTC to manage these market research teams, getting to work on projects such as assisting Grupo Aeroportuario del Pacifico investigate the possibility of expanding their cargo infrastructure in the region, and helping local companies chart export plans.

“I think her knack with cross-cultural communications, language and the connections she has especially in Mexico and the U.S. propelled her, unfortunately for us as it was our loss, into a great position as chief of protocol,” said Bella Heule, the former president of the World Trade Center San Diego and now executive vice president for the national WTC. “Not only did we recognize her talent, but so did Naval Air Forces and the city. It was a joy to work with her.”

“I would manage all the diplomatic and international relations, so I was pretty much that liaison with the consular corps, all the ambassadors that would come to town, the presidents, I had royalty like the Princess of Romania -- oh, it was fun,” Hijar said.

Fun, but difficult. As a representative for the mayor she would often attend three or four events a day, not to mention serve as a city representative on international boards including the World Trade Center and Japan Society, as well as prepare for the visits of foreign dignitaries, which happened at least twice a month, select appropriate gifts with culturally appropriate wrappings, and brief the mayor on topics to talk about and what to shy away from.

Even in the midst of this more cultural position, Hijar was able to maintain some focus on the business side of things.

“It was very interesting. I met a lot of interesting people and learned a lot, especially about that connection between international relations, diplomatic relations and business,” she said.

Take the case of United Kingdom-based grocery chain Tesco looking to potentially expand in San Diego, for example. Hijar said many other countries don’t conduct business deals the way U.S. firms do -- “If they don’t feel welcome, they just will not put their money there,” she said, noting that it was part of her job to ensure that the business development teams, including that of Tesco, felt welcome here.

In 2009, she caught the entrepreneurial bug and ventured out on her own, working on several different concepts tangential to international business, including filming a collection of video interviews with CEOs on their career paths aimed at inspiring college students.

Then Heule, her friend and mentor who was the CEO of the World Trade Center San Diego, took a job as an executive vice president for the national WTC organization in New York, leaving Hugh Constant with interim president responsibilities here in San Diego. Hijar said Constant asked her to return to the WTC to open its Latin America desk, which she did through October 2013 when she saw the trajectory of the organization trending down and decided to return to her video work full-time, but in a more comprehensive way.

“The idea was, with my years of doing research, I always found it very frustrating that to get to trade statistics you had to go to the census department and then you’re lucky that they didn’t change the link, because of course you bookmarked everything, now you have to go on a wild goose chase to find it,” Hijar said of the piecemeal and lackluster international trade resources available.

“So I started thinking that was my frustration, let me build something that would help people take all these official links …and try to make it user-friendly so that a student who has a business school project, or a CEO that is contemplating exporting to new markets, or just starting to export or whatever, that it’s user-friendly enough that everyone can find the information they’re looking for.”

IBiz247 officially launched about a year ago and is free to explore. Hijar and her team of 10 are just starting to add advertising to the site but wanted to hold off until it was thoroughly built out. IBiz247 also outsources to reliable service providers around the globe able to answer trade questions and talk companies through the process, has a marketplace component and job and event posting boards.

The site gets about 150 visitors a day, the majority from the United States, followed by the U.K., Brazil and Mexico, in that order. Half of these are return visitors, and the average time spent on iBiz247 is a whopping 13 minutes, way above the typical handful of seconds most websites achieve.

While the site has been a success thus far, Hijar has high hopes for what it will become when all of her plans are fully executed. And though iBiz247 was created to facilitate exports and imports globally through easily accessible information about the process, Hijar has a soft spot for San Diego.

“I think people know, wherever you go around the world, you travel and say you’re from San Diego and they’ve heard it, but I don’t think we’ve educated people to think about San Diego as a place where they can actually come do business,” she said. “And if we just plant the seed I think it’ll grow very fast: San Diego, business — ah, the perfect combination.”