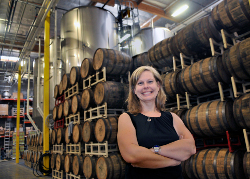 The job not only helped Moon pay her bills, but also gave her the chance to meet many people in the craft beer industry.

But Moon says she wasn’t sure what to do with her law degree until she met a wine lawyer about a year after her 2008 graduation.

Six years later, Moon has established herself as a nationally recognized legal expert on all things craft beer and has worked with more than 100 breweries. She is known in the industry as “The Craft Beer Attorney,” and she secured a desired domain name to match her moniker (craftbeerattorney.com).

Most of her clients are in California, but she does some national trademark work, as well.

Her office has a kegerator in the kitchen and she says she offers visiting clients beer, but they rarely take her up on the offer.

Moon, founder of The Craft Beer Attorney APC, sees a lot of her work as educational because she says California’s laws pertaining to the industry have a lot of gray areas. She is often barraged with the question: “Can I do this?”

“One reason I love working with breweries is they all want to follow the law, but they want to know what the law is," Moon said.

Trademark law is also a frequent focus of Moon’s work, because as the industry has grown, disputes over brewery and beer names have become increasingly common.

Mediation can be a very good forum to resolve trademark disputes, Moon said, because the industry is a collaborative one in which most people are willing to work things out.

She said she tells clients with strong trademark cases that the easier they make it for a competitor to let go of a company or beer name, the sooner things will get resolved.

“For example, if you call and demand somebody pull their product off the market, that does not go well,” Moon said. “If you let them sell through what they have and agree not to do it again, that seems to go over bit easier.”

He also said Moon has been very helpful as his company has moved ahead with a large expansion project at a new site on Empire Street in Miramar, while working out a new partnership at its previous location on Cabot Street.

Zien said Moon is great to work with because of her knowledge of the industry, along with how she treats her clients.

“She is really easy to work with, you can reach her quite easily and she really wants to help,” Zien said. “She really is the go-to person in the field.”

Other clients include Fall Brewing Co. and Green Flash Brewing Co., both of San Diego.

As some of the breweries Moon represents have grown in size, more of them are also reaching out to her firm with employment law inquiries, prompting her to hire employment lawyer Jessica Hardacre-Gianas as of counsel.

The firm has another attorney well-versed in business matters, an office manager and a legal intern whom Moon plans to bring on full-time once she graduates.

Meanwhile, Moon is working to become certified to do legal work in Arizona and Colorado so she can serve more clients. But she said she doesn’t plan on the firm growing much more when it comes to staffing.

“I don’t want to get too big, because I want to deliver the same level of service,” Moon said. “I like the personal feel we have.”