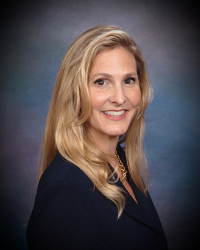 Monica Piepenkotter learned her first major lesson in finance in rural Minnesota at the age of 8, when -- like many young kids -- she asked her parents if she could have a horse someday.

“They told me I could have whatever I wanted, as long I could finance it,” she says.

So Piepenkotter got a paper route, saved up every penny, and by the end of the year she had enough to buy a horse, which she continued to feed and care for using money she earned delivering papers and working other jobs.

Piepenkotter said the experience taught her the value of money -- and the importance of having goals for how much you need and how you intend to use it.

Since then, Piepenkotter has used that personal drive and interest in finance to become one of the nation’s top five female financial advisers, according to rankings by Wealth Management Magazine.

As the head of a private wealth advisory team in the La Jolla offices of Merrill Lynch’s private banking and investment group, she manages $1.6 billion in assets, which she says reflects how much personal wealth has grown throughout the San Diego region.

“Although we don’t have real geographic restrictions on where we get our clients, most of them are right here in San Diego,” she said. “We’ve just built our business one client at a time, mostly through referrals.”

Piepenkotter, who holds a master’s degree in finance from the University of Wisconsin, began her career Chase Securities Inc. in New York in 1994, helping institutions manage the risk of their investments in derivatives.

“That was really the hot market back then and I enjoyed being where the action was,” she said.

Although the industry was then heavily dominated by men, she said she never encountered any gender-related hurdles, although she did feel awkward sometimes sitting at the trading desk after hours, when all the men around her started talking about sports -- a topic she had no interest in.

“At first, I thought I should come up with things to say, just to fit in, but then I decided it would be better just to be myself,” she said.

In 1997, she joined Merrill Lynch as a vice president of its corporate and institutional client group, working with the finance managers of some of the world’s largest enterprises to hedge their exposure to fluctuations in interest rates, foreign exchange and equities.

But as a person who loves the outdoors, she eventually decided that New York City was not where she wanted to end up.

After a brief return to Minnesota to work on the equity portfolio management team for Alliance Capital's $60 billion Premier Growth Fund, Piepenkotter moved to her husband’s hometown of San Diego in 2000 to rejoin Merrill Lynch just as it was beginning to roll out its private banking group focusing on individuals with high net worth.

Dealing with individuals rather than institutions was a change for Piepenkotter, but she built a solid base of customers by putting together custom-built strategies for each client, focusing on their unique goals, priorities and preferences.

When one of her clients came into a windfall of money by selling his company, for instance, Piepenkotter worked to develop a plan that included what price targets he wanted for his stock investments; how to finance his notion of maintaining several residences in the United States and abroad; and how to build charitable trusts to meet his philanthropic goals.

In her spare time, Piepenkotter enjoys reading, hiking (making annual treks to hike Montana’s Glacier National Park with her husband and kids) and running, including the New York Marathon.

Piepenkotter also devotes time to Salkexcellerators, building support for the Salk Institute for Biological Studies. “It’s good to feel that you’re contributing to a new generation of scientists who are going to make real differences about how we live in the future,” she said.