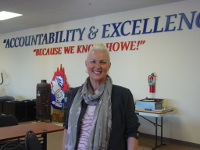 It was two years after Bill Howe started his plumbing business in 1980 that Tina Howe arrived from Yorkshire, England, and moved into 974 Thomas Ave., Unit 5, in Pacific Beach. Bill’s office was in Unit 9, downstairs.

“I needed a job," Tina said. "He (Bill) was changing out his telephone announcing service. He realized that his customers would be better served speaking with a live person. He hired me as a new secretary and to answer the phones.”

Tina worked an old-fashioned phone system with caller-hold buttons. Sometimes, she lost a customer on a call.

“I think I got them with my (English) accent, because they always seemed to call back,” she said.

The company was small then, with one truck and two technicians.

After becoming best friends, Tina’s chemistry matched Bill’s and they married in 1985. She worked another 20 years answering the phones and dispatching before she became the operations manager. She said she is very good at holding people accountable.

The company now has 85 trucks and has had four company moves during its 35-year tenure.

“There are three divisions: plumbing, heating and air conditioning and restoration and flood services,” Tina said.

Bill and Tina have a family of four girls. Three of them work in the business.

“It is one of the blessings of a family business, you get to see your children every day," Tina said. “So I get to see my grandchildren often.” They also have two grandchildren and another on the way.

The three daughters are Jamie, dispatch manager; Halee, who runs the restoration division and acquired the company contractor’s license, which includes expertise in emergency water restoration repairs; and Jessica, who helps with the accounts payable and receivables. There is an extended family team that does the hiring. General manager Bill Haus married one of the daughters and has 27 years with the company. Niece, Amber Baynard, has been with the company for 18 years, and heads up human resources.

When asked how the family business works with children on the team, Tina replied, “Bill and I lead by example. Our children are extremely hard working. They set the stage. They are very good listeners. Our children just did not step into their current roles. They had to earn those positions by starting at the bottom, answering the phones to learn the business. They learned their weakness and strengths and today the positions they hold compliment their strengths.”

The children report to managers and Tina cited one of their learning moments:

“When Jamie first started working with us, we had 'Challenge Week.' On Tuesday everyone had to be here at 7 a.m. and everyone had to be on time. Jamie was late — and because we all lead by example she had to go around to every staff member and apologize because she was late. She was never late again. I am passionate about (discipline) and my children are no exception.”

When Tina was asked how she would counsel her younger self knowing what she knows today, she said, “I know that there was heartache and mistakes. But it is all part of the journey. I married Bill when I was 22 years old, and as a young girl you can’t have that knowledge that you have now. Wisdom comes with time. So I wouldn’t change anything. I think the mistakes that we made were natural mistakes to grow a business our size.

“I am very proud of the Bill Howe brand and organization. I feel very privileged to be Tina Howe. I love my husband, I love my children. If there was one thing I would do over is that I would have defined Bill’s and my role more clearly. A lot of our anguish has been because we treaded on one another’s toes. Sometimes an ego can get the better of us. Husband-and-wife businesses should have clearly defined roles with honest communication, minus any ego in the relationship. Neither is better than the other. You are equals. The ultimate goals of the business are the same.”

She noted that Bill is the strategic thinker and planner, and wants to make changes. She, however, is good at orchestrating those changes and in this way they complement each other.

“I love being an employer and employing people. I love creating an environment where people can flourish; where they make a great paycheck and support their families. We are a service business. Our assets are our technicians. They are the face of Bill Howe. They are the ones who knock on everyone’s doors, 'Good morning! How can I help you today?'”

Tina proudly stated that Bill Howe Plumbing would want to be known as an exceptional employer.

“We want people to stay with us,” she said.

"We actually now have a program where we take people in as laborers," Tina said. "We have plumbing school that we pay for and send them to. We have a very rigid program that we put them through for two years. Two years as a laborer and four years to get their journeymen license and then they go out on the truck as a skilled technician. Even there we have a hierarchy where they start at the bottom. They are managed closely, because it is very easy to make mistakes out there."

Tina devotes a lot of time and energy to charitable endeavors and makes sure that giving back to the community is a key aspect of Bill Howe Plumbing. The company works with the Food Bank once a month. Company team leaders head up the community outreach.

“Sometimes, it’s difficult to get ourselves there on Wednesday night from 6 to 8:30 p.m., but it is so rewarding," she said. "It really helps overall company morale.”

The company is also involved with the American Heart Association.

“Right now we have a drawing contest for children 5 to 12, to draw their idea of a healthy heart with a short description of what keeps their heart healthy,” she said.

Bill Howe Plumbing is also involved with the Burn Institute, Warrior Foundation Freedom Station, and local sports clubs. The company has a softball team and Tina says she acts as team mom, bringing the snacks and water to the games.

“I knew we would be successful, because we are both hard-working, driven people," she said. "We want more for our children than we had for ourselves. I am sure that was a big driving factor. I wanted my children to go to college. Back then in the '80s, I did not think college was important to run a business, but today with the social media world, you have to be more articulate. Nevertheless, I think if you are intelligent and hardworking you can succeed.”

She was asked how she would want people to know about the Bill Howe family business.

“We are honest, ethical, hard-working, and a great employer,” Tina said.

Tina is also an avid runner and has completed a marathon on every continent and in more than 25 states. When asked how she would like to be remembered today, she said, “I live life relating to people. I want my kids to say I am a great mom!”

-By Jerry Kwasek, Special to The Daily Transcript