Whenever you drive past an orange cone or a detour sign in San Diego, they're very likely the pride and joy of Candace Friedman, who has been providing safety products from her National City company, Acme Safety and Supply, since 1999.

Friedman is not only proud of the barricades, message boards, arrow signs and other products Acme rents and sells, but also of the way she and her 30 employees conduct business with clients throughout the region.

"We find that service is our most valuable item," the San Diego native said."People don't give good service anymore and we specialize in service. There are other woman-owned traffic-safety companies in San Diego. Mine is just the best."

Friedman has earned the right to sound so confident. About 30 years ago, the Granite Hills grad went to work for a traffic-safety company that wasn't in the best financial shape. She helped bring structure to the firm's billing and merchandising operations, and stayed there for 15 years, eventually becoming manager. When the company was bought out by a Los Angeles-based competitor, she was told the new owners didn't feel a woman should be in management in a male-dominated field.

"They said they would keep me as a front person but not in management," she said. "Customers came to me and said they heard about it through the grapevine, and it wasn't right. Why don't you go out on your own, they said. So I quit and opened Acme." 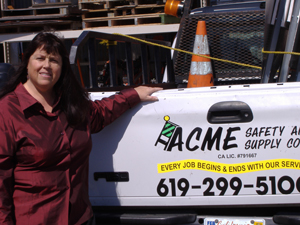 Her reputation helped gain clients, which include Hazard Construction Co., San Diego Airport Authority and G. Scott Asphalt. Networking within the industry brought more clients and events, such as traffic control and all signage for Super Bowl XXXVII in San Diego in 2003. The firm was named most valuable vendor for its work at the event.

"Getting involved in networking was the best thing for me," she said. "I always tell other women to get involved — not just become a member of an organization, but get on committees, get involved and meet people. Networking is the key."

The connections led Acme to conducting traffic control and signage for feeding the poor and homeless on Christmas Eve, as well as events for Habitat for Humanity, St. Madeleine Sophie's Center, elementary schools jog-a-thons and carnivals, United Way, Leukemia and Lymphoma Society, Father Joe's Villages, March of Dimes and Wounded Warrior Project. Friedman also has been a member of a volunteer fire department, and a volunteer for Special Olympics and San Diego Blood Bank.

Professionally, she has served on the board of Associated General Contractors of San Diego (AGCSD), and is current president of the Women's Construction Coalition, working in outreach to young professionals and college students to promote jobs in construction and provide guidance on entering the profession. She also is chairperson for construction and commodities for Caltrans District 11, which is developing a mentor protégé program.

Even with all her extracurricular activities, Friedman has managed to expand her site on several acres in National City and add another site in El Centro. Her employees sell, rent, and service barricades, message boards, arrow boards, light towers and other equipment used in road construction. They also carry products such as striping paint, vests, hard hats, safety glasses, first-aid kits and earplugs, and help clients develop traffic-control plans. A custom sign shop at the National City site also creates banners and vehicle graphics.

A single mother of a 24-year-old special-needs daughter and 21-year-old adopted son, Friedman credits the strong work ethic she learned from other women for keeping her focused. She cites as inspiration Diane Keltner, president of Synergy Electric and the first woman president of AGCSD, and her sister Debra Jackson, Director of Finance of a medical device company.

"I have worked as a dog groomer assistant, rented surfboards at the beach. I enjoyed everything I did and learned from each job I had."