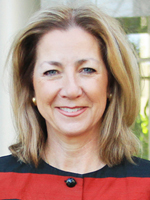 As a young girl growing up in Cincinnati, Patricia Trauth developed a deep appreciation of art from her mother, and nature from her maternal grandfather. Today, as principal landscape architect in the San Diego office of AECOM, a global interdisciplinary architecture, engineering and construction firm, she uses her artistic skills by designing public spaces with natural elements for the betterment of the public.

"I didn't discover landscape architecture until I was in my 20s, but as a child I always found plants fascinating. I have a plant that I've had since I was 10 years old," Trauth said. "I think nature is pretty interesting, how water and sunlight produce plant growth. It's a very dynamic type of material to design with.

"Landscape architects are educated to be stewards of the land. Our task is to bring nature into development and vice versa — take development and try to sensitively integrate it in with nature, producing cohesive development," said Trauth, a former art teacher whose career as a landscape architect spans 28 years in San Diego. "It's very interesting to see how my profession has changed over the last 30 years, and how sustainability has become such an important issue with development."

Specifically, she says, there are more requirements associated with designing a landscape, particularly with regard to water use. Therefore, public open space has become much more valuable.

"In the past with development, the positive space was the building and the negative space was what was in between the buildings," said Trauth. "Today, every square foot of outdoor space is highly valued and that's exciting to see."

Trauth has a particular affinity for the use of plant material in her designs.

The roundabouts on La Jolla Boulevard and the Coronado City Hall and Community Center are among the many projects bearing Trauth's landscape architectural signature. Most recently, and for virtually her entire six-year tenure at AECOM, Trauth worked on the expansion of Terminal 2 at San Diego International Airport/Lindbergh Field.

"It was a very exciting project because many of the facilities that I designed are very much indoor/outdoor facilities, and they take advantage of the great climate we have here in San Diego," said Trauth. "So I was able to design the paving materials as well as the plant material. It was cool to utilize the tensile fabric, the tentlike structures that are reminiscent of the sailboats that are right across Harbor Drive."

Since the expansion of Terminal 2, Trauth said she has been working on several projects along the north side of the airport.

"The streetscape along Pacific Highway is going to be redone with a series of mature palm trees along the street, new sidewalks and a new parkway. There will be entry monumentation on either side of Sassafras, which is currently under construction," Trauth said. "As I go to the airport, it's exciting to see how the area has changed with the redevelopment. You're starting to see pedestrians walking about and I anticipate, in the next year when the rental car center opens, you'll see a lot more people enjoying the outdoor space."

Trauth also worked on the expansion of Carlsbad's McClellan-Palomar Airport. As a member of the South County Economic Development Council, Trauth helped research and write a white paper discussing the feasibility of transforming Brown Field into an "aero-tropolis," an airport as the centerpiece for new development.

A past president of the San Diego Chapter of American Society of Landscape Architects, Trauth is highly respected in her profession, though still one of its relatively few females.

"I think we've come a long way, but I think that we've got a ways to go toward getting more women professionals in the development industry. It's not just business in general, it's also women and the way we view themselves," said Trauth, who said her six sisters have had a profound influence on her life. "I think women need to, as Sheryl Sandberg would say in her book, "Lean In," they need to sit at the table. Women need to volunteer to do things, take on the tough projects and get comfortable with failing once in a while, not worrying about it and just moving on."