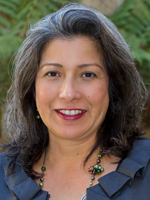 As the youngest of five children growing up in a traditional Latino home in El Monte, Calif., Patricia Prado-Olmos was raised in a supportive and nurturing environment and taught the value of a good education. Throughout her career as an educator and in her current position as vice president of the Division of Community Engagement for California State University San Marcos (CSUSM), she has helped create a similar supportive and nurturing environment for students and the conditions to help them succeed in their educational endeavors.

"My mom's mother (born in Mexico) had always told my mother she could do more and she should get an education. So my mom's goal was to finish high school and make sure her children attended college," Prado-Olmos said. "My (eldest) sister was the first in our family to go to college and so, by the time it came to me, I had a lot of resources, even though I had to figure things out on my own. My mother and my sisters ... we've always been there for each other." 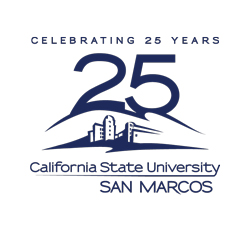 Like each of her three sisters and her brother before her (all of whom have graduate degrees), Prado-Olmos studied at Pomona College, where in 1987, she earned a B.A. in psychology. Six years later, she earned a Ph.D. in educational psychology at UC Santa Barbara. She joined the faculty of CSUSM after a pair of two-year stints at the University of Houston and Pomona College, respectively. She ascended to the vice-presidency in January, having previously served as a faculty member in CSUSM's School of Education, an associate dean, and dean.

"My basic responsibility is to oversee the Division of Community Engagement," Prado-Olmos said. "The division is responsible for nurturing meaningful relationships and building innovative partnerships around the community. Our work includes forging partnerships for student internships and other civic engagement programs as well as supporting faculty as they do research and teach in collaboration with community organizations."

"(President Haynes) arrived with a very deliberate intent to understand the community that we serve, and to actively connect and engage us with the community. She has done that. This idea of engagement with the community matched very well my own experience in the School of Education," said Prado-Olmos, who said her Division of Community Engagement is unique among all schools in the California State University system.

"In terms of my leadership and what I try to do, I see that my job is to create the conditions and find the resources and support for people to do the work that they are the most talented to do," Prado-Olmos said. "So, with my (associate vice presidents) and the staff here, if someone comes to me with an idea and it was feasible ... I always try to work to ‘Yes, how can we make it possible?' because this is going to support students and the community."

Prado-Olmos is the by-product of her training as a psychologist and her Latino heritage. She said "her story" has helped her connect in various ways with a lot of students, not just Latinas.

"You know, how I approach the world is grounded in my learning and family background. For me, it's all about how people learn and how do people make sense of what's happening around them, reflect on it and then how does that eventually lead to learning?" she explained. "And that kind of perspective is rooted in my identity, as a person who was raised in a somewhat traditional Mexican household, with a particular history and family ties and cultural traditions. So aspects of my identity and how I connect with people are wrapped up all together."

A self-described "science fiction geek," Prado-Olmos observed the parables in various Star Trek episodes and has used them in her teaching.

"There's this one episode ("Turnabout Intruder") where Kirk and a female character switch personalities and they're living in each others' body. And to me, it's a fascinating study of behaviors that are attached to gendered identities," said Prado-Olmos, who is quite happy with her own identity.

"Cal State San Marcos is a great place to work. It's a wonderful place to get an education," Prado-Olmos said of the educational institution, which this year is celebrating its 25th anniversary. "We have fabulous faculty, caring staff and an administrative team that is authentically concerned with the well-being and the success of the students here."

None of them more so than Patricia Prado-Olmos.