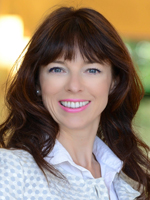 Campion came to Los Angeles from her home in Latvia in 1999. She spent eight years working in high-end retail stores, one of them being Louis Vuitton on Rodeo Drive. After two years in L.A. she moved to Peoria, Ill., where she earned her M.B.A. in business management from Bradley University. She spent two years in Peoria before returning to Southern California, making San Diego her home.

"I felt like a fish in the water," she said of Southern California. "Sometimes you just have the feeling you fit in some places better than others."

It was upon her return that Campion dove into her career in commercial real estate.

"I thought it was very interesting because real estate involved dealing with people —meeting a lot of new people, finance, accounting, market analysis — so it seemed like an interesting industry," she said.

DTZ's real estate services range from agency leasing, tenant representation, and investment and asset management, to research, project and development management, and consulting. As of Jan. 1, DTZ became an international company with offices in 50 countries, employing upward of 28,000 people. Campion is looking forward to future opportunities for international collaboration.

"I'm excited to get to work with the many other wonderful DTZ offices located around the world," she said. "As a leader of a research team, it's thrilling to have the opportunity to learn more of what our colleagues are doing across the globe in countries like France or China, and discuss their local markets. As a unified company, I think we're all excited at this great opportunity to build new relationships and expand and deepen our knowledge, experiences, and service capabilities."

"My job is kind of separating the noise from what's actually real when it comes to making decisions," she explained. "In our industry, so many people seemingly write articles without hard concrete evidence and support — so it becomes just an opinion, more or less. We spend a great deal of time, energy and resources in researching our internal data, and so we are confident in the figures and analyses we produce."

DTZ has the ability to refer to its internal data when decisions are being made and know the information is supported by extensive research.

Campion has been shaped by several people she considers professional mentors. Some of these mentors include DTZ's current regional managing principal, Daniel Broderick, who taught her to take charge of her life and take responsibility. Past President John Frager always emphasized the importance of training.

"His philosophy was, ‘Make sure every 12 months you have something to put on your resume,'" she said.

She also says Rick Reeder, one of the founders of her company, taught her to "work hard and play hard. It's all about the relationships and taking care of your clients, no matter what they ask for."

"Training is huge. If you don't train yourself, if you don't educate yourself, you are just yesterday's news," she said.

Campion's drive for self-improvement is apparent, not only in her professional life, but in her personal life as well. She is an avid runner, having completed three marathons (4 hours, 24 minutes), and has been a member of the San Diego Track Club since 2004. In 2012 she signed up for a one-year personal coaching program to push herself to the next level. Included with the enrollment for this program was a ticket to a four-day Anthony Robbins conference titled "Unleash the Power Within." What she didn't know upon enrolling was that she would be participating in a "Fire Walk." The exercise (walking across fire) was intended to teach participants to "take the first step," overcome their fears and do what they have been putting off in their lives and break through. The idea is that you can do anything you set your mind to if you can get past your inner fear.

"I had no idea I would be walking on fire when I arrived at the event on day one. I was scared and was questioning my sanity, but did not want to go home without this experience," Campion said. "I would do it again in a heartbeat because I am no longer afraid. As long as you prepare and do what you have control over, there is no reason to be afraid. Just go for it."

Whether Campion is working, running, spending time with her 9-year-old daughter, Valerie, visiting her family in Latvia, or walking on fire, she is always striving for personal growth. She has been able to learn something from all of her life experiences and apply it to her everyday life. She is constantly challenging herself and every time, it seems, coming out on top.

By Jamie Miller, Special to The Daily Transcript