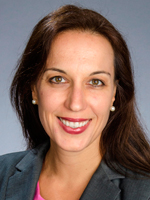 Even as a young child, Teodora Purcell was a good person to have on your side.

"I had a very strong sense of fairness and was always trying to make things right and fair," said Purcell, an immigration attorney with the San Diego office of Fragomen, Del Rey, Bernsen & Loewy, LLP. "Growing up, I would always defend those kids who don't necessarily fit in, and found myself advocating for them."

Born and raised in Bulgaria, where she completed law school, Purcell came to the United States 16 years ago on a scholarship from University of San Diego School of Law, fell in love with the city, and decided to stay. She entered the school's LLM (Master of Laws) in Comparative Law program designed specifically for foreign-educated attorneys, and after obtaining her degree, passed the California Bar Exam.

An immigrant herself, Purcell started practicing immigration law and later became a Specialist in Immigration and Nationality Law, certified by the State Bar of California, Board of Legal Specialization. "Having gone through the process and because I speak several languages, immigration law was a natural fit for me," she said. "Immigration is very personal. It allows me to help clients with their issues, and it also lets me make an impact on their lives."

While at USD, Purcell spent many hours volunteering at Casa Cornelia Law Center, a nonprofit legal provider in San Diego, where she was an interpreter, a law clerk and, after graduating, was hired as a staff attorney working with indigent asylum seekers, victims of domestic violence and other human or civil rights violations. She found the work very rewarding, and the experience helped shape her career.

"Sister Ann Durst, who is an attorney, a passionate advocate and founder of Casa Cornelia Law Center, was the first professional who believed in me and gave the opportunity to do real legal work, and to this day, she remains my inspiration and I am forever grateful for her mentorship," Purcell said.

In 2006, she joined Fragomen, a global immigration firm that serves clients in more than 20 countries and has been recognized as the Corporate Immigration Law Firm of the Year by The International Who's Who of Business Lawyers (2005-14). But the law wasn't her first choice.

"As a child, I initially I wanted to become a doctor, but then I realized I couldn't really deal with human pain," she said. "So I ended up choosing the legal profession because it also allows me to help people make a difference in their lives, and advocate for those who can't advocate for themselves.

"I take a lot of pride in my work and always try to do the best for my clients. But I'm especially proud of my pro-bono cases where I've helped some very vulnerable clients. One I remember is a special immigrant juvenile status case for a teenage boy from Iraq, whose mother was killed in Iraq, and he fled with his father from the persecution in Iraq. But his father passed away shortly thereafter. This boy ended up with a Navy SEAL who stepped up and became his guardian, and I helped him in what was one of the first cases of its kind in San Diego County. It is a special avenue to get a green card for certain foreign children in the United States who have been abused, abandoned, or neglected and are unable to be reunited with a parent and are found to be dependent on state court. I was fortunate to help him through the process."

Another highlight of her early career, she said, was the opportunity in her second year of practice to successfully present an oral argument before the Ninth Circuit Court of Appeals on an interesting immigration issue.

Purcell credits her mother, who still lives in Bulgaria, as a major factor in her life. "She undoubtedly influenced me the most personally, and professionally too, because although she is not a lawyer, she always urged me to do my best, be strong, never give up, and be always kind and loving," Purcell said. "She had three degrees, a political career, and a family with two twin girls at a very young age. By example, she influenced me for my drive and success."

In 2014, Purcell was voted by her peers as a finalist in immigration law in The Daily Transcript's annual San Diego County Top Attorneys program. She is also the multiple recipient of the Wiley Manual State Bar of California, and the Casa Cornelia Law Center pro-bono public awards. She and husband Keith, a business owner, live in Scripps Ranch with their daughters, ages 6 and 9, who are "almost bilingual" and love spending their summers in Bulgaria with their grandparents.

Her advice for women who want to be successful in their chosen profession:

"Do your best, believe in yourself, become an expert in your subject matter, be persistent, be creative, and always treat your clients with the highest level of service, professionalism and integrity. Surround yourself with people who support you. Treat everyone with respect and kindness no matter their position."