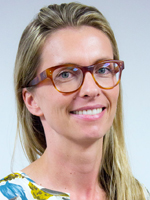 It doesn't take long when speaking with Anneke Stender, executive vice president of TAG, to notice her deep-seeded passion for her work. "I never come to work thinking, ‘Oh, I'm going to work,'" she said. "I love what I do."

Stender came to California in 1997 after she finished high school in her home country, Germany. She was planning to be in San Diego for only nine months, but after six months of San Diego's culture and weather, she fell in love.

"So it's very simple. I've only been with TAG," Stender said of her professional work history.

She had a couple of internships — one at Merill Lynch and another at Smith Barney. Moving forward from her internships, she knew she didn't want to become a stock broker. She looked to her professional mentors at the time, who told her financial analysis was not really the industry in San Diego. They suggested she go into accounting — learn where the numbers come from, then analyze them.

"I was doing everything. I was the office manager; the accounting person in-house; worked with clients on a consulting basis as their accountant; I did marketing and HR, which was great," she explained. "It was a perfect job out of college as a business major because I didn't know what I really wanted to do."

She worked as a "chameleon" for two years until she began to assume the role of internal controller. At that point, the company was expanding and she began hiring new people.

As the company was expanding, so were Stender's ideas.

"In 2007, I wrote a business plan and presented it to Rob (Scherer) because I had the idea of starting a family CFO division," she said. "When working with business owners, I realized how unorganized they were on the personal side. As their controller, when I had to renew a line of credit or get a loan for the company, banks generally asked for a personal financial statement from the owner. It was always very difficult to get that personal financial statement from the owners, so I came up with the idea. You know, what we're doing for these companies, well, individuals need help as well."

The business plan was put into action. In 2008, the family CFO division was born and since its inception has grown 40 percent every year.

"We've really grown the company together," Stender said. "I've learned everything from Rob. He's always been and will always be my mentor. We are generally on the same page and work well together as business partners and it's been a great ride."

"I know we add a lot of value and people see that passion. I think that's why people want to work with us," she said. "We create that peace of mind for our clients. I know that's why we are successful."

In addition to growing a successful business, Stender is an active participant in a few professional associations, including STEP (Society of Trust Real Estate Professionals), Estate Planning Council of San Diego, ProVisors and SDSU Business Alumni Association. Last year she was awarded "Top 20 Women Who Impact San Diego," and is a four-time finalist for "Women Who Mean Business." She was a finalist in the 2015 Women of Influence Award. She also received a nomination to Scripps Health Gift Planning advisory board in January 2015.

When she isn't taking on the business world, winning awards and participating in several professional associations, you can find her at home in Mission Hills with her husband, Steve, and her two children Emma and Ellis. She is active and enjoys running and Pilates.

By Jamie Miller, Special to The Daily Transcript