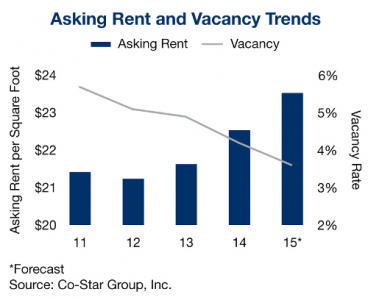 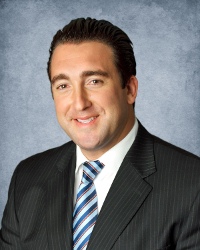 San Diego is unique due to its location, with Mexico to the south, the desert to the east, the water to the west and Camp Pendleton to the north. And in 2015, the unique city with the best weather in the country will retreat below pre-recession level as the market’s available retail space continues to remain in high demand.

The invigorated job market in San Diego is drawing more and more people. Approximately 37,000 new jobs will come online this year, and as these new jobs are created new households will be formed. Spending on big-ticket items will increase.

Many new households will form in outer submarkets, where rents and home prices are notably lower than in core areas. New households in San Diego’s outlying areas are expected to support tenant demand for vacant, multitenant retail space and smaller strip centers, which have been the last to recover from the previous downturn. Spending will also get a boost from an evolving tourism market. Despite the fact that growth in the number of day-trip visitors is easing, the frequency of hotel stays is anticipated to climb considerably over the next five years. Statistics show that hotel goers in San Diego recorded a double-digit increase in average spending per trip last year, a trend that benefits retailers near top tourist attractions.

Retail sales will increase more than 5 percent in 2015.

Increases in retail property rent and occupancy supported an uptick in velocity in 2014 that will gain momentum in 2015. Operators will raise asking rents 4.4 percent to $23.52 per square foot, building on last year’s spike of 4.2 percent. For the last three years, retail operations have been improving.

Still, investors have been hesitant to dive back into the market. However, momentum is noticeably building as risk aversion dissipates for most types of multitenant retail. A great deal of the rise in retail deal flow involved strip centers after tenanting concerns decreased in recent months. Buyers will purchase stabilized centers with average cap rates in the mid-6 to low-7 percent range. Anchored centers can change hands for first-year returns that are 100 basis points lower. In the single-tenant arena, exchange investors will remain active when deals are listed. Still, restrained development activity will limit the number of net-leased deals this year.