After getting an earful from patent lawyers and biotech companies upset that the initial U.S. Patent and Trademark Office’s guidance on subject eligibility for naturally occurring products — think DNA and protein mutations — was released without first seeking comment, the office released a revised version in December.

Local patent lawyers say the revisions are an improvement, but don’t — and can’t — negate the overly restrictive Supreme Court interpretations in the Myriad and Mayo cases that have made it more difficult for biotech companies to get patent protection, particularly for diagnostic innovations.

In the Association for Molecular Pathology v. Myriad Genetics case, the Supreme Court ruled that a naturally occurring DNA segment is a product of nature and not patent-eligible simply through isolation. To be eligible, there must be a product with a distinctive name, character and use other than that found in nature. 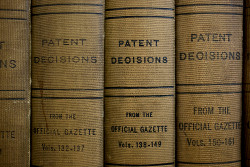 Volumes of patent decisions from the Official Gazette of the U.S. Patent and Trademark Office. Photo by Andrew Harrer/Bloomberg

In Mayo Collaborative Services v. Prometheus Laboratories Inc. the court found that laws of nature alone are not patent-eligible; they must be significantly more than what is found in nature.

“You can sort of view it as there’s the Mayo arm and the Myriad arm,” said Les Overman, a registered U.S. patent attorney and vice president of the San Diego Intellectual Property Law Association, about the patent office’s 2014 Interim Guidance on Subject Matter Eligibility.

“Both were somewhat restrictive, and I’d say the revised version, in terms of the Myriad arm, moved the needle considerably, and the Mayo arm, it didn’t do much there.”

The updated version, which had a 90-day comment period after its December release, broadened the scope of eligible products. Instead of excluding any naturally occurring substance, no matter how formulated it is, now modified or combination products can be patent-eligible.

Lisa Haile, a partner at DLA Piper and co-chairwoman of the firm’s global life sciences sector, agreed that the amendment to combination product-eligibility was one of the most significant and beneficial changes in the updated guidance.

“I would say generally there are not a lot of differences, but where I feel a little bit more comfortable might have to do with combination products — combining multiple components in a composition or method claim,” Haile said.

“There is better guidance there and perhaps the door was opened a little bit for allowing certain types of claims dealing with combination products,” she said.

She said that under the initial guidelines, claiming a protein would be almost impossible. Now, claiming it in the context of a composition containing other products that are not naturally occurring alongside that protein might lead to a successful claim.

“But practitioners will still need to be creative,” she said.

Another change that will broaden the scope of eligible claims was the addition of “function” and “other properties” to the “markedly different” phrase examiners must consider.

Craig Countryman, principal at Fish & Richardson, said the March version stated that there must be a marked difference in structure between the naturally occurring product and what was up for patent eligibility, while the updated version allows for differences in structure, function or other properties.

“So that’s another expansion,” Countryman said. “It gives you, if you’re a practitioner, more things to argue if you want to argue it’s markedly different — you’re not just bound by structure.”

But that’s also one of the main challenges with the guidance, aside from the larger problem that it exists at all and has to cater to the Supreme Court rulings that many in the industry say are too broad and overreaching.

Some of the key terms used to determine eligibility — such as “markedly different” — are still vague and open for interpretation by individual patent examiners.

“Where I have probably the most issues is that from examiner to examiner, I think there’s still inconsistency as far as how the guidance is applied, and I don’t see that that’s going to change,” Haile said. “It’s sort of inherent nature of USPTO examiners; sometimes you’re going to get inconsistencies.”

Joe Mallon, partner at Knobbe Martens and chairman of its chemical and pharmaceutical group, said the “markedly different” and “directed to” phrases are particularly problematic, though “directed to” is clearer than the language in the first version.

“It will take quite some time for consistency on what some of these phrases mean,” he said. “Like ‘directed to’ — ‘directed to’ means the claim in the patent now has to be directed to one of the exceptions. Previously, the language had been whether the invention is just based on or involves an exception. So ‘directed to’ is a more specific wording.”

That’s what Mallon said was the main takeaway and improvement in the updated guidance: specificity and clarity.

“There were significant changes between the earlier March 2014 and December guidance; they’re much more coherent and easier for people to follow,” he said.

“They were written in a much more specific way; the original guidelines were broader and harder for the patent examiners to administer. So they provide clearer guidance I think is the best way to think about it. In substance there was a lot of similarity in the sense that a product of nature is still not patentable; and so the core remains the same, but they better defined the boundaries.”

Stephanie Seidman, a partner at McKenna, Long & Aldridge, said the impacts of the Supreme Court’s interpretation in these cases and the patent office’s attempts to align with it are detrimental to the biotech industry — particularly the diagnostics field, which is based on small changes and modifications to naturally occurring products.

“The diagnostics industry is, I think, going to be devastated, because identifying a marker in the body and testing it and finding a link previously unknown to be related to diseases is likely no longer patentable, and that’s the basis for many companies,” Seidman said.

Overman agreed, saying the diagnostic side of the industry is waiting to see if the circuit court will make any changes to allow diagnostic methods to qualify for patents. If this doesn’t happen, companies will still innovate, but Overman said the funding won’t be at necessary levels — particularly for small companies.

“Where comes the real problem is if you can’t demonstrate you’ll get a patent for it, you don’t get funding,” he said. “So the smaller biotechs get really hurt by it because if they can’t get issued a patent or say they’re on the pathway to an issued patent, investors leave them in droves.”

While the guidance is still titled “interim” and practitioners say they expect slight changes here and there, no one sees major revisions or sweeping reforms transporting the industry to its pre-2012 days.

“The patent office is very literal in its interpretations, and so I don’t know that they can do much better than they’ve done,” Seidman said. “I think legislation is needed. That’s not in the near future, but I think it’ll take time for the full impact to be felt and then perhaps there’ll be some rallying by large companies that have the resources to do something.”

Countryman said he thinks a new case will come along where the court will rule that something is patentable, giving more guidance and a broader allowance of claims.

“I think it will happen eventually,” he said. “It may take a couple years, but with a lot of these things the pendulum swings back and forth.”

“Historically for a lot of years … they allowed claims on biological organisms and DNA, and you see things go that way for a few years before the court realizes, ‘Oh boy, look at the direction we’ve gone in, now people are getting patents on everything, we have to rein this in.’

“And the past couple years we’ve seen the court trying to rein it in. The next couple of years, I think the pendulum will swing back the other way, and we’ll have the court step in and say, ‘We didn’t mean to make all software patents invalid or mean to prevent you from getting any patents.’ I think it’ll happen, but it will probably take a little time.”